‘Getting their ducks in line’: Saudis SCRAMBLE to punish piracy in apparent effort to satisfy Premier League over Newcastle bid

‘Getting their ducks in line’: Saudis SCRAMBLE to punish piracy in apparent effort to satisfy Premier League over Newcastle bid

Of all the announcements that fans of Premier League club Newcastle might have hoped would hasten the departure of their current owners, a promise about reducing piracy more than 4,000 miles away might not have been one of them.

The see-saw saga of the takeover of the club by the Public Investment Fund of Saudi Arabia tipped the balance back towards jeopardy last week when the World Trade Organization (WTO) ruled that Saudi Arabia had breached its obligations regarding international piracy.

FIFA duly backed the ruling and BeIN Sports, the Qatar-based broadcaster which is carrying a $1 billion international arbitration case against Saudi Arabia over the dispute, as well as demanding that the kingdom should take “the necessary steps” to protect media rights partners and “football itself” from piracy.

UEFA were equally unequivocal, warning that beoutQ, which was hosted on Arabsat, based in Riyadh and majority Saudi-owned, threatens the lucrative broadcasting deals which are the financial lifeblood of the game at the highest level and “the existence of professional sport as we know it.”

Little wonder, then, that Saudi officials launched an “online inspection campaign” against piracy in the kingdom on Sunday, claiming to analyze 231 websites with a view to banning them from being browsed domestically.

The Official Saudi Authority for Intellectual Property announced that websites involved in illegal streaming would be shut down, with fines of around $66,000 for sites breaching copyright protection law and jail sentences of up to six months for individual perpetrators.

“That’s the Primer League’s ‘do something about the piracy’ box ticked then,” one Newcastle fan drily remarked on social media, reacting to news of the potential punishments and a letter from the Saudi Arabian Football Federation assuring major sports bodies and every broadcasting rights holder that it accepted its anti-piracy responsibilities.

That’s the Primer League’s ‘do something about the piracy’ box ticked then.

Both bodies had clearly been stung by the WTO’s findings and the chair of the UK’s International Trade Select Committee’s description of an ongoing takeover without anti-piracy measures as “an insult” from a country that had been “stealing premium UK sports and entertainment content.”

The UK Foreign Secretary had struck a different tone when he seemed to give the go-ahead from the government on Thursday.

Speaking in vague terms to Sky News, Dominic Raab said the UK should “welcome engagement” and investment in football, likening the debate to the one that surrounded Russian billionaire Roman Abramovich’s takeover of Chelsea in 2003, when some fans and ministers were concerned at the prospect of a takeover by a figure who was little-known to English fans.

Raab’s response could have been seen as largely irrelevant given that Sports Minister Nigel Huddleston had already confirmed there were no government no plans to intervene, adding that the takeover was “genuinely a matter for Newcastle and sport.”

That leaves the Premier League as the party the consortium needs to convince, with the hope being that an effective crackdown on the seemingly ubiquitous pirate streams will satisfy their owners’ and directors’ test, allowing the Saudi-backed group to seal its $370 million investment in return for 80 percent of the club.

There is speculation that solving the piracy issue may have been added as a key condition to the takeover being allowed, although Simon Jordan, the former owner of top-level club Crystal Palace, said that he did not envisage the Premier League blocking the move.

Jordan argued that the “moral outrage” caused by Saudi Arabia’s alleged murder and human rights abuses would not scupper the deal because of the UK government’s existing “involvement” with the Kingdom.

Premier League chief executive Richard Masters had reportedly told Hatice Cengiz, the fiancee of murdered dissident Jamal Khashoggi, that he was “extremely sympathetic” to her cause as she urged fans and governing bodies to reject the advances of the regime that she believes was responsible for Khashoggi’s death.

“I believe that it is going to be very, very difficult for the Premier League to stop this takeover,” Jordan told TalkSport. “Right now, they’re getting their ducks in a line with broadcasters and finances.

“There are regimes that have bought football clubs that are maybe not equally as unpalatable as certain aspects of this regime, but are also not the most ideal regimes.

“The Premier League might use it as great leverage to see if they can use it as a mechanism to stop piracy of their rights which are being sold to one of their business partners, BeIN, being hijacked and used for the benefit of beoutQ or Arabsat.”

Newcastle fans had start-of-the-week deja vu on Monday as many Toon Army blogs and fan accounts on Twitter shared reports that the takeover was “imminent” – a word, as some noted, that has become wearily familiar during a takeover process that has gone on for at least 3 months now.

Even if there are more sightings of Saudi private jets on Tyneside this week, the deal remains no nearer than it has been at any time over the last few months, remaining true to Jordan’s point that he “would expect to read about the about the deal on the day it’s done, not weeks and days and hours before it’s done” when he initially voiced skepticism about its chances in January.

At least there is little chance of the consortium acquiring a relegated club, assuming a deal can be reached by the start of next season. Newcastle enjoyed one of their best results of the current campaign in front of an empty stadium on Sunday, moving 11 points clear of danger by winning 3-0 at home to Sheffield United and leaving manager Steve Bruce to face questions he inevitably could not answer about the future of the club.

“For a lot of the supporters, [takeover deliberations] seem to have happened so many times,” Bruce amiably observed, speaking before the match. He concluded with an understatement: “People are becoming a little bit used to it.” 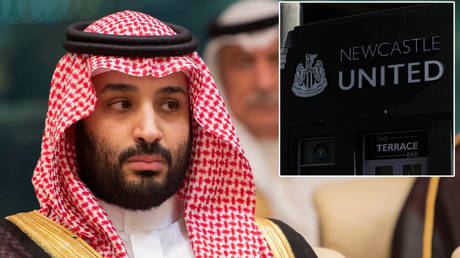 ‘Rapist, pedophile and a...

‘Pandering to the PC bri...