Get hyped! UFC’s new Usman vs. Masvidal promo builds the excitement ahead of HUGE UFC 251 event on ‘Fight Island’ (VIDEO)

Get hyped! UFC’s new Usman vs. Masvidal promo builds the excitement ahead of HUGE UFC 251 event on ‘Fight Island’ (VIDEO)

It was the fight the MMA world wanted to see, and finally, after it first appeared that the bout between Kamaru Usman and Jorge Masvidal wouldn’t take place at UFC 251, the fight is ON, and the anticipation is rising.

Reigning UFC welterweight champion Usman is the class of the UFC’s 170-pound division. He has lost just once in his entire career and is undefeated in the UFC.

The man known as “The Nigerian Nightmare” captured the title with a stunning performance against Tyron Woodley, then defended the belt with a brilliant fifth-round stoppage of trash-talking rival Colby Covington at UFC 245 last December.

Now Usman faces the challenge of the man many rated as the 2019 Fighter of the Year. Jorge Masvidal returned from 16 months away from the cage and sensationally knocked out Brit Darren Till in London.

That win earned him a fight with undefeated former Bellator and ONE Championship welterweight champion Ben Askren, a decorated wrestler whose ability to take people to the mat made him one of the most dominant champions outside of the UFC.

But Masvidal produced the standout performance of his career as, after an ill-tempered build-up, he knocked out Askren in just five seconds at UFC 239 in Las Vegas.

It gave Masvidal the fastest finish in UFC history, and a highlight-reel moment for the ages as the 16-year veteran was catapulted to superstardom.

Masvidal then went on to defeat Nate Diaz at UFC 244 to become the UFC’s “Baddest Mutherf*cker” (BMF) champion at Madison Square Garden.

It set things up perfectly for a title fight with UFC champ Usman, but after Masvidal failed to come to terms with the UFC over the fight, the promotion moved on and booked rising contender Gilbert Burns instead.

Burns had just knocked out Tyron Woodley and was carrying huge momentum, but that all came to a crashing halt when the Brazilian failed a COVID-19 test prior to flying to Abu Dhabi for the fight.

It meant the UFC and Masvidal returned to the negotiating table once again as they thrashed out a deal for “Gamebred” to take on Usman on just six days’ notice for the UFC welterweight title.

The fight is now official, and the UFC’s promo for the fight sets the table perfectly for arguably the biggest title fight of 2020 so far. 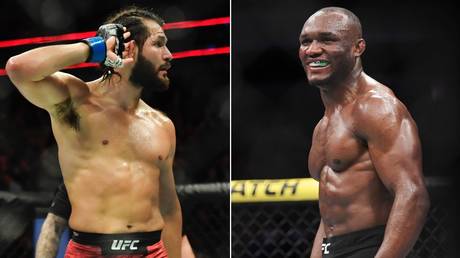