Gareth Bale has been accused of showing contempt for Real Madrid in recent weeks, but the scrutiny he receives is often wide of the mark. The public reaction could have been even worse had he acted as if he were a key player.

While his teammates were bouncing around and launching Zinedine Zidane skywards at the Alfredo Di Stefano Stadium on Thursday night, Gareth Bale was treading a fine line whether he wanted to or not.

As hard as it might be to imagine the affable multi-millionaire unduly worrying about his conduct in the aftermath of winning the 13th trophy of his career – all with the Spanish giants – there was a clear degree of concern over his public perception in his reserved response to the wild celebrations being enjoyed by the squad on the training ground pitch.

While the likes of captain Sergio Ramos looked without a care in the world as they posed with the La Liga trophy for the first time in three seasons, Bale resembled a late guest doing his best to stay out of the photo album, smiling from afar with his arms crossed while Zidane was lofted and even looking across while the squad surrounded the silverware, as if unsure how to act.

In that split second, Bale appeared as uncertain as his future at the club remains. Sixteen appearances this season represents a scant showing for a player whose inspirational performances for an otherwise average Wales side show no signs of a star well past his peak, including a hugely influential role as his nation eased past Hungary to reach Euro 2020 on a memorable Cardiff night in November.

Bale looked as overjoyed on that occasion as he was reticent on Thursday. However he had acted, he must have known that a critical reaction was inevitable.

He could have gone the way of former England defender John Terry, who is still made fun of for playing a full part in Chelsea’s trophy celebrations after missing the victorious Champions League and Europa League finals in 2012 and 2013.

Terry is still occasionally mocked for stealing the limelight despite playing an integral captain’s role in those seasons for Chelsea, so the reception Bale would have received for positioning himself center stage after his modest part in Madrid’s league season would have risked a scathing reaction.

It would also have given Spanish newspapers extra ammunition with which to snipe at Bale, although they have needed little to go on at times during a season in which they have frequently positioned Bale as the unwanted and unwilling passenger at the Bernabeu.

That assessment seemed more like the somewhat bored response of representatives constantly being asked about Bale’s departure, echoed by Zidane, who has maintained that Bale is staying at the club as recently as this week.

Zidane warned reporters days ago that their attempts to tell tales of a rift were doomed to fail because of their inaccuracy, which makes it all the more curious that he has not used Bale more regularly during a triumph that was far from assured before La Liga returned last month, heralding a relentless 10-match winning streak for Madrid and a shockingly inconsistent run-in from Barcelona.

The most Zidane might feel is an understandable irritation at Bale’s apparent willingness to fuel rumors of a lack of commitment. You could view his jokes about his love of golf, which are as much a product of media coverage hammering the point into disfigurement, as an ill-advised way of potentially bringing an end to the constant line of questioning, but a little humor is not unwelcome in the days of bland interviews.

Bale has asserted that football is his priority and hardly seems like a loose cannon, with his playful waving of that comedic flag and insinuation that he was taking a nap providing a shot of light relief that would surely only have concerned those keen to see footballers become a procession of po-faced robots.

As befits a $100 million player on the bench, Bale is under the microscope, his every tiny action open to wilful misinterpretation. The likeliest insight into his mindset you can draw – and the least satisfactory to sensationalists, despite the riches he receives – is that he is as frustrated at not being on the pitch as the fans who appreciate his abilities.

Some Madrid supporters have whistled their winger but the majority know what the man who has helped them to four Champions League trophies, most memorably when he became the first substitute in a final to score twice from the bench in the 3-1 win over Liverpool two years ago, can offer them.

They will hope as much as Bale does that he will play some part in the onerous-looking trip to Manchester City next month, not least because Madrid know they will have to score at least twice to reach the quarter-finals at the expense of Pep Guardiola, the man who was often their tactical nemesis when he was at Barcelona.

Unless he is given a chance in that match, Bale’s talent will almost certainly have been wasted this season. Stagnation is a poor lot for a player of his potential brilliance, and reason enough for him to have been reluctant to have joined in with giving his boss the bumps. 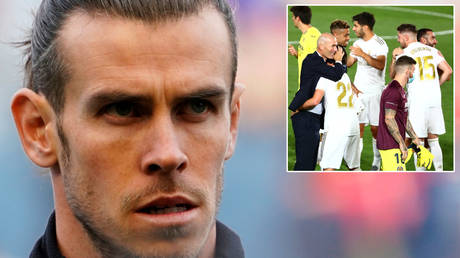