A professional gamer screamed in agony as she was struck by lightning in a freak accident at home, leaving thousands of fans fearing for her safety after her live commentary on streaming platform Twitch came to an abrupt end.

Boston-based eSports star Jamie Bickford, who has 80,000 followers under her Karma alias on Twitch, was tracking a live game of Rocket League when she terrified viewers by screaming out in pain and crying after a mystery bang was heard.

The young streamer’s hands required treatment and her controller, which she believes conducted the lightning, was warped beyond use by the bizarre bolt from the blue.

“Ah, f*ck,” Bickford was heard groaning while the game continued, before continuing: “I just got…” and trailing off into tears.

She later told concerned fans that metal going through her house had been struck during a thunderstorm, adding: “Actually think I just got struck by lightning through my controller. What the f*ck?”

Bickford thanked her fans for an “outpouring of love” and revealed that she had spoken to doctors about her enflamed flesh.

“Hands healed up after being iced all last night,” she reported the following day, adding that she would not be taking part in a game that night.

Actually think I just got struck by lightening thru my controller…

“Very minor burns, my controller is melted near the USB connection where I got flashbanged over the weekend. I am completely fine.”

Shocked fans continued to check on Bickford. “Hands are Gucci, homie,” she reassured one, before telling another who asked to see a photo of her injuries: “Nothing to show, bro. They’re normal.” 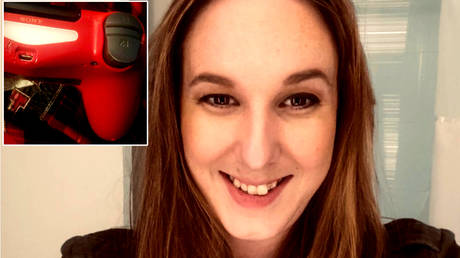 How EncroChat works and everything...