The recent passing of Khabib’s father and trainer, Abdulmanap Nurmagomedov, has placed the timeline as to Khabib’s scheduled title defense against interim champ Gaethje into uncertainty, although Dominance MMA head Abdelaziz said that the Russian would definitely face his rival in 2020.

However, Abdelaziz told TMZ Sports that Khabib suggested that Gaethje instead take on McGregor in the meantime – a proposal which was shot down by the American contender.

“Justin said no,” Abdelaziz said. “Khabib told me to tell Justin to go fight Conor. Justin said no. Listen, we dictate this.

“Conor right now, he can be a backup fighter. He can go make weight and he can maybe make some money but at the end of the day, [Khabib and Justin] are the two champions.”

Despite his loss to Nurmagomedov in 2018, McGregor arguably remains the biggest draw in mixed martial arts. A fight for either Khabib or Gaethje against McGregor would be expected to outsell the numbers should they instead face each other, but Abdelaziz says that his fighters are more motivated by athletic competition than any potential ‘red panty night’.

“He’s not even number three, he’s number four or five,” Abdelaziz said of the Irishman. “Conor can go fight Nate [Diaz], he can fight [Joge] Masvidal. [He needs] to get some wins. He needs to fight some good opponents.”

However, Abdelaziz admits there may be one shortcut he can take to fast-track his title ambitions: fight the 11th ranked, 18-1 Khabib teammate Islam Makhachev

“I said, the only way to fight Khabib is if he fights Islam Makhachev – and [then] Khabib will fight him.” 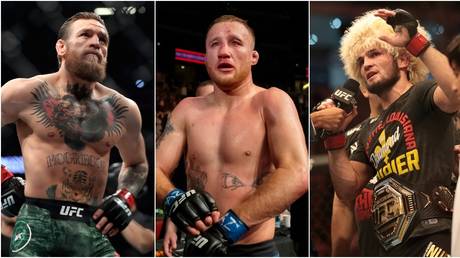 JPMorgan CEO gets all the money in...