Manchester United fans held a protest against plans to join the Super League and the team’s owners at the club’s training ground on Thursday morning, and were involved in a brief exchange with manager Ole Gunnar Solskjaer.

The Red Devils were one of 12 founding outfits that signed up to the failed breakaway competition, and even though they pulled out alongside five Premier League rivals on Monday, supporters still wished to have their voices heard and make calls for wider changes at Old Trafford.

Blocking the entrance to the complex, their anger was aimed at the club’s ruling American billionaire family the Glazers, and it was only when the manager, two of his coaches, and a member of the first team squad addressed them that they considered leaving – as confirmed by a club statement.

“At approximately 9am this morning a group gained access to the club training ground. The manager and others spoke to them. Buildings were secure and the group has now left the site,” it ran.

🚨 JUST IN: Manchester United fans are protesting against the Glazers and have blocked both entrances to Carrington, United’s training ground #mufc #mujournal

Brandishing banners containing messages such as “51% MUFC”, in a nod to the fan-friendly ownership model seen in the Bundesliga, plus “Glazers Out” and “We decide when you play”, the group were reportedly told at first that Solskjaer would not come out to see them as they were “intimidating”.

Gaining his courage eventually, however, the Norwegian addressed the mob alongside coaches and club legends Michael Carrick and Darren Fletcher plus midfielder Nemanja Matic.

Fanzine Red Issue claim that Solksjaer was accused of not speaking out despite having opposed the Glazers’ takeover in 2005, to which he reportedly replied “Joel loves the club,” in reference to the main family member pushing for the ESL switch.

The angry men allegedly fired back that the controversial figure “only loves the money he takes out the club” and scoffed at Solskjaer that they “didn’t need a history lesson from him”, while Glazer himself was forced to address the furor yesterday in an attempt to clear the air.

We have 10+ people who were genuinely present able to testify our quote was exactly what was said, yet some anonymous bellend (who had to retweet our thread about the protest occurring) claims it wasn’t said 🤔

Apologizing “unreservedly” for his tone-deaf mishap, Glazer acknowledged that he “failed to show enough respect for [football’s] deep-rooted traditions” while now “personally committed to rebuilding trust with our fans”.

“Over the past few days, we have all witnessed the great passion which football generates, and the deep loyalty our fans have for this great club,” his letter to supporters read.

“You made very clear your opposition to the European Super League, and we have listened. We got it wrong, and we want to show that we can put things right.

Backed out of the Super League: ✅
Woodward resigns: ✅

“Although the wounds are raw and I understand that it will take time for the scars to heal, I am personally committed to rebuilding trust with our fans and learning from the message you delivered with such conviction,” Glazer concluded.

But while chairman Ed Woodward has already stepped down, the majority of the United faithful wish to see more heads roll and get back their club. 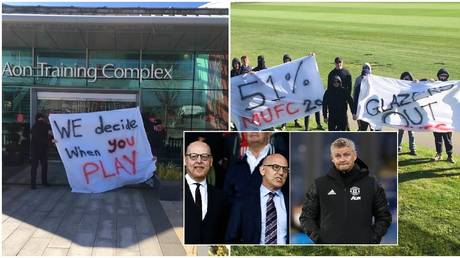 Podium protests BANNED at Tokyo &a...