When UFC rivals Dustin Poirier and Conor McGregor appeared to agree to a rematch in the UFC on social media, plenty in the MMA world were happy. One man who wasn’t, however, was former interim champion Tony Ferguson.

Ferguson launched an astonishing attack on Poirier after the Louisiana lightweight stated his happiness to not just fight, but to make even more money for his charity, “The Good Fight Foundation,” after McGregor pledged $500,000 as part of their agreement to fight each other.

“I fight for a lot of things, but nothing more important to me than fighting for change and giving back @TheGoodFightFDN,” Poirier tweeted.

“The generosity of @TheNotoriousMMA will help countless in need. I have accepted, Conor has accepted, and the fans demand it! Let’s go @ufc @espnmma.”

Despite Poirier’s excitement about being able to put more funds in the coffers of his charitable foundation, Ferguson took exception to his fellow former interim champion’s decision.

Ferguson was originally set to face Poirier in the co-main event of UFC 254, but after Poirier failed to come to terms with the UFC on a fight purse, the fight was scrapped. Now Poirier appears to have moved on, and Ferguson isn’t happy.

“What a sell out, taking a bribe from an international terrorist. Good job kid,” he ranted on Twitter.

“I represent America. All that talk about the fight game only to be afraid and be left behind out of the loop. Take the money and be proud fake.”

What A Sell Out, Taking A Bribe From An International Terrorist. Good Job Kid. I Represent America. All That Talk About The Fight Game Only To Be Afraid & Be Left Behind Out Of The Loop. Take The Money & Be Proud Fake. pic.twitter.com/VpKamihpzI

The reaction may have betrayed Ferguson’s frustration in the UFC lightweight division that looks set to move on without him unless he can land himself a big fight soon.

Ferguson was long considered the No. 1 contender for the UFC lightweight title, but his repeated attempts to face Khabib Nurmagomedov fell by the wayside as injury, illness, and then the advent of the coronavirus pandemic, kept forcing the postponement of their eagerly-anticipated fight.

Then, with a shot at Khabib on the line, Ferguson agreed to face Justin Gaethje, who stopped him to take his interim title, as well as his title shot against Khabib.

The presence of Poirier as a top contender, plus New Zealand’s Dan Hooker, Russia’s Islam Makhachev and the arrival of three-time Bellator lightweight champion Michael Chandler, has made Ferguson’s path back to the top of the division an even tougher route to negotiate. 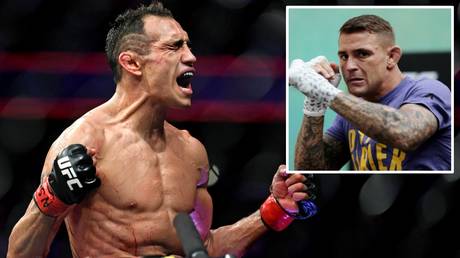