Former France forward Christophe Dugarry has been forced to apologize after labelling Lionel Messi “half autistic” in an astonishing tirade against the Barcelona star.

Speaking about the struggles current France star Antoine Griezmann has had since his big-money move to Barcelona last summer, Dugarry suggested his countryman should stand up to Messi to resolve any issues.

“What is [Griezmann] afraid of? A kid who is 1.5 meters tall and half autistic?” Dugarry said on RMC Sport, Goal reported.

“All he has to do is show some balls at some point. I’ve been saying for a year that he has a problem with Messi. He has to hit him in the face.

“It’s true that Messi could give him more passes, but honestly I am not surprised. Griezmann loses balls, doesn’t play with confidence. Griezmann should go and talk to Messi to solve the problem.”

Mindful of any backlash over the comments, the 48-year-old former AC Milan and Barcelona forward took to Twitter to apologize on the official account of his ‘Team Duga’ show.

“At no time did I want to stigmatize or make fun of people with autism disorders, it was not my intention. I apologize to people I have shocked and I will [apologize] again this evening,” the message read.

Griezmann’s future at Barcelona has been the subject of intense speculation after he remained on the bench until injury time of Tuesday’s crunch clash against former club Atletico Madrid, which ended 2-2 and further dented Barca’s hopes of retaining their La Liga title.

The 29-year-old Frenchman has been seen as struggling to gel with Messi in particular since he joined the Catalan club for €120 million last summer.

Griezmann has only started one of the Barcelona’s four matches since the restart from the Covid-19 break, with head coach Quique Setien claiming it was “difficult” to find room for him in the team without “destabilizing” it.

Dugarry himself spent a season at the Nou Camp from 1997-98, largely failing to make his mark before moving back to Marseille in his homeland.

He was part of the squad which won the World Cup on home soil in 1998, making a total of 55 appearances for France and scoring eight times. 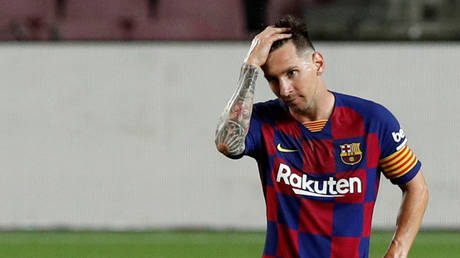 Christmas WILL go ahead as ‘normal’ but Brits should take tests before visiting elderly relatives, Sajid Javid says