Stade Francais have announced that some of their players who had previously tested positive for Covid-19 are now experiencing ‘lung lesions’ in a stark warning to the return of sport amid the ongoing global pandemic.

French publication l’Equipe reported earlier this month that the Parisian club had recorded ’25 positive tests’ related to Covid-19 with the team noting at the time that the health situation had “deteriorated“, prompting them to suspend training and enforce a period of isolation on their playing and coaching staff.

“Following the Covid-19 tests carried out on Monday, Aug. 10, it appears that the health situation of the Stade Francais Paris has deteriorated despite compliance with the health measures in force,” the club announced at the time.

“In order to prevent any additional risk of contagion, in consultation with the authorities and the NRL, the decision to immediately stop all training was taken.”

The club was placed on lockdown until August 17 when further tests were commissioned, but they revealed on Wednesday that several players who had been struck down with the virus are experiencing additional health complications.

“In light of the compulsory medical examinations for all players who have been diagnosed positive with the RT-PCR test for Covid-19, it appears that some of them are carriers of lung lesions due to the virus,” Stade Francais announced in a statement.

“These lesions require a period of complete rest estimated for the moment at a minimum of one week and which will be added to the fortnight already observed.

“Other reviews are currently underway.

“In addition, the seizure of the medical commission of the National Rugby League for an advisory opinion resulted, for obvious health reasons, the cancellation of the friendly match against RC Toulon scheduled for August 27.

“Once again, the club would like to thank all those who have shown their support during these last days.”

This presents an obvious dilemma to the various ‘Return To Play’ protocols currently being explored across the globe, as many of the longterm impacts of the novel coronavirus remain a mystery.

Lung damage has been reported as one of the potential side effects of contracting Covid-19 – something which presents an obvious risk to professional athletes, given that it could potentially be problematic to players’ cardiovascular health, or in laymen’s terms – their ‘gas tank’. 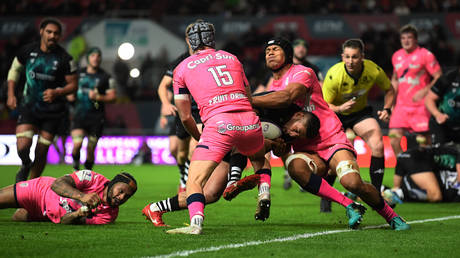 Furious MPs tell French to ‘get a...