Barbora Krejcikova survived a scare from Russia’s Pavlyuchenkova to win her first-ever Grand Slam title at Roland-Garros on Saturday as the Czech star saw off the Russian’s fightback to claim victory in a thrilling final set.

The unseeded Krejcikova has looked early on as if she was going to ease towards the French Open title, blitzing Pavlyuchenkova by a score of 6-1 in the first set.

But before the champagne bottles were opened in the Czech player’s camp, Pavlyuchenkova found her groove in the second and began to author what was looking to be a decisive comeback.

The Russian powered to victory in the second set, winning 6-2 to set up a decider in the final set – but a thigh injury suffered towards the end of the second appeared to hamper her in the third.

Both players traded the lead and broke each other’s serves in the final set but in the end it was Krejcikova who crossed the finish line first, securing the win after Pavlyuchenkova put too much into a backhand return shot to win the decider by a score of 6-4.

“I’m super happy I was able to enjoy it. I’m just really happy,” said Krejcikova afterwards, who claimed her first singles Grand Slam after previously winning at both the French Open and Wimbledon doubles in 2018.

“I just want to thank everyone for coming today and cheering for us,” she added. “The atmosphere was amazing. I was super happy that I was able to enjoy it. I am just really happy. I just thank Martina Navratilova and all the others and my team and my coach and everyone back home. It’s hard to put words together.”

‘I can’t believe that I actually won a Grand Slam’ 🏆

An emotional Krejcikova also paid tribute to her compatriot and former Czech tennis star Jana Novotna who passed away from cancer in 2017.

“I cannot believe that I won a Grand Slam. I was going though a had time when Jana Novotna passed her away, pretty much her last words to me were ‘just enjoy and try to win a Grand Slam’. Pretty much this whole thing is because she is looking down. She was such an inspiration. I just really miss her and hope she is happy right now. I am extremely happy.”

🇨🇿 Barbora Krejcikova finally gets her hands on the French Open trophy – a moment that she will cherish forever! #RolanGarros pic.twitter.com/kL2eCPf51B

Krejcikova’s win comes in just her fifth Grand Slam singles main draw of her career, and hasn’t yet appeared in the US Open or Wimbledon main draws – meaning that when she does so, her debut will come as a Grand Slam champion.

And despite the biggest win of her career, the aforementioned champagne might have to remain on ice just a little bit longer as she can make this weekend an even more memorable one when she competes alongside Katerina Siniakova in the women’s doubles final against the team of Iga Swiatek and Bethanie Mattek-Sands on Sunday. 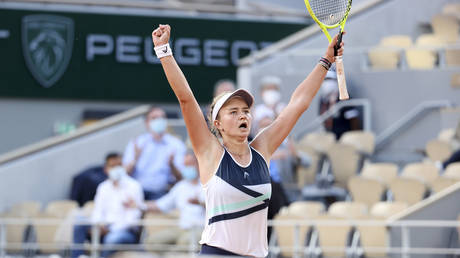