Close
Trending News
HomeSportFrench Open 2020: Will it be lucky No. 13 for Nadal or a second in Paris for Djokovic as Grand Slam title record race continues?

French Open 2020: Will it be lucky No. 13 for Nadal or a second in Paris for Djokovic as Grand Slam title record race continues?

French Open 2020: Will it be lucky No. 13 for Nadal or a second in Paris for Djokovic as Grand Slam title record race continues?

Rafael Nadal and Novak Djokovic face off in what’s set to be a historic French Open final on Sunday as both players look to edge closer to holding the all-time Grand Slam record.

Nadal, who has won the French Open a record 12 times in his career, is just one Grand Slam title short of Roger Federer’s record of 20 for male players, while Djokovic can move to 18 titles if he triumphs at Roland Garros for the second time.

Sunday’s meeting in Paris will be the 56th time the two players have gone head-to-head in their careers.

Djokovic has the overall edge with 29 wins to Nadal’s 26, and recently their head-to-head record has been largely in the Serbian’s favor, with 14 of their last 18 meetings going his way.

The Spaniard is acutely aware that beating Djokovic – who is one of just two players to beat him at Roland Garros along with Robin Soderling – won’t be easy.

“Without playing my best tennis, the situation [against Djokovic] is very difficult,” Nadal said ahead of the final.

“I know that is a court that I have been playing well on for such a long time, so that helps.

“But at the same time, he has an amazing record here too, being in the final rounds almost every single time.

“He is one of the toughest opponents possible. But I am here to keep trying my best.

“I know I have to make a step forward. I think I did one in the semi-finals. But for Sunday that is not enough. I need to make another one.

“That’s what I’m looking for. I am going to work hard to try to make that happen.”

If anyone can feel confident facing Djokovic in a French Open final, though, it’s Nadal.

On clay, the 34-year-old leads their head-to-head record 17-7, while at Roland Garros Nadal has won six of their seven matches together.

Nadal has been defeated just twice in 101 matches in Paris – and never in a final – meaning a win on Sunday would not only mark his 13th title but also his 100th win in the competition.

He has been as imperious as ever in this year’s tournament, in which he is yet to drop a single set.

Djokovic also enjoyed straight-set wins in the first four rounds of the competition, but he dropped a set to Pablo Carreno Busta in the quarterfinal and was taken to five by a resurgent Stefanos Tsitsipas in the semifinal, having had a match point in the third set against the Greek.

Like Nadal, he knows he needs to bring his A-game to have a chance of repeating his 2015 quarterfinal win here.

“I hopefully will be able to play my best tennis, because that’s what’s going to be needed in order to have a shot at the trophy,” he said.

“This is what it comes down to. I’ve been there; I’ve done it. I understand what needs to be done and how I need to prepare myself. I’m looking forward to it.” 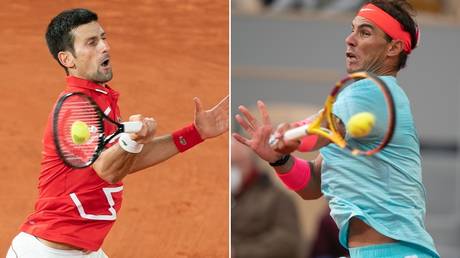