French connection: Neymar ‘talks move with Messi’ – then tells Thiago he ‘loves’ and will miss ‘messing’ with new Chelsea signing

French connection: Neymar ‘talks move with Messi’ – then tells Thiago he ‘loves’ and will miss ‘messing’ with new Chelsea signing

Paris Saint-Germain star Neymar has confessed that he will miss his close day-to-day relationship with Thiago after the defender checked in at Chelsea – and is said to have spoken to Lionel Messi about joining the French giants.

The most expensive player in the world offered a heartfelt message to his Brazil team-mate on Instagram, where he said he “loved” the veteran defender and would “miss messing with him every day” after he ended his eight-year stay at the reigning French champions to make his long-anticipated move to Stamford Bridge.

Thiago spent three years with Neymar in Paris, culminating in the Champions League final defeat to Bayern Munich earlier this month, and looked every inch like he was relishing the completion of his dream switch to the Premier League as he touched down in London.

He posed half-naked with a Chelsea home shirt in a hotel room before grinning for a photo with his freshly-inked contract at a club he called “iconic”.

Neymar’s strike partner, France forward Kylian Mbappe, was among those to congratulate the 35-year-old on his arrival at the club, as well as former Chelsea captain John Terry and legendary Brazil defender Roberto Carlos.

Chelsea are desperate to improve a defensive record that was the worst of any team in the Premier League top ten last season, so coach Frank Lampard and owner Roman Abramovich will be hoping that the most experienced of their summer signings will help to considerably shore up their backline alongside fellow new arrival Ben Chilwell.

Paris, meanwhile, are understood to be aiming to prevent Lionel Messi from joining one of Chelsea’s rivals, Manchester City, by persuading the wantaway striker to sign for them from Barcelona.

Neymar and Paris team-mate Angel di Maria, who is a close friend of Messi’s from the Argentina squad, talked to the 33-year-old earlier this week as he weighed up his options following his decision to end his career-long stay at Barcelona, according to ESPN.

Paris could have to pay up to €700 million (around $817 million) should Barcelona enforce a release fee in Messi’s contract, which is currently being disputed by his legal team, but the departure of high earners including Thiago could allow them to finance the deal without breaking Financial Fair Play (FFP) rules.

Messi is believed to have encouraged Neymar to rejoin Barca as he pondered his options earlier this season, having left the Camp Nou for Paris for a world record fee of around $259 million in 2017.

The potential partnership between Neymar, Mbappe and Messi would constitute arguably the most dangerous and exciting forward line in the world, although City are thought to be leading the race to sign him thanks to his understanding with Pep Guardiola, the coach he worked with when they won two Champions League titles at Barcelona.

Guardiola reportedly spoke to Messi before Barca crashed out of this season’s Champions League with a humiliating 8-2 quarterfinal defeat to Bayern in Lisbon, sounding the striker out about his “project” to restore the deposed champions to the top of the Premier League.

City are keenly aware of the restrictions imposed on them by FFP, having overturned a decision this season by UEFA to ban them from the Champions League after they were initially found to have breached the regulations. 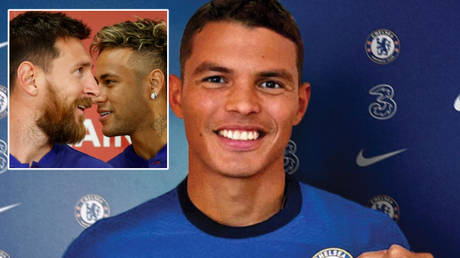