Former Russian professional football player Sergey Kharlamov, who captained Rubin Kazan, has been sentenced to 12 years for organizing a mass pyramid fraud that left thousands of investors without money.

On Friday, Vakhitovskiy district court in Kazan sentenced seven members of the ‘Rost’ pyramid scheme to prison, with Kharlamov being ordered to serve his sentence in a standard regime penal colony.

READ MORE: ‘FOR social injustice’? US men’s soccer team signals virtues with tracksuit messages… but some fans are left confused

The Rost pyramid scheme was established in 2015, offering clients high finical returns from their investments.

The founder of the scheme, Andrei Makarov, received 13.5 years in jail, his sister Natalia Makarova was sentenced to 12.5 years, and Kharlamov, who was among the organization’s members, will spend 12 years behind bars.

The 47-year-old played for football clubs such as Rubin Kazan, Neftekhimik Nizhnekamsk, and Diana Volzhsk during his career.

The defender, who played for Rubin across three spells, retired in 2004 after an argument with manager Kurban Berdyev. 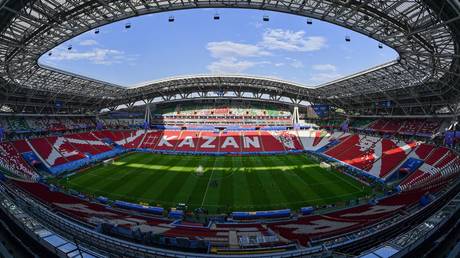 Hopes for Christmas holidays as tr...