A former communications director at MLB team the Los Angeles Angels has been indicted on charges of giving a coctail of opioids to pitcher Tyler Skaggs, whose body was found to contain high levels of the controlled substance.

Eric Prescott Kay, whose attorney confirmed the accuracy of a story reporting that he had spent years supplying oxycodone to Skaggs, faces a count of distribution of a controlled substance resulting in death and serious bodily harm.

The charge could see troubled Kay sentenced to life in prison, while he is also suspected of conspiracy to possess with intent to distribute a controlled substance over Skaggs’ death in a team hotel before a game in July 2019.

Skaggs died by choking on vomit after using drugs and alcohol, with toxicology results incidicating he had been taking the strong painkillers oxymorphone and fentanyl alongside alcohol.

The indictment said that Kay “knowingly and intentionally” gave a mixture and substance that had resulted in Skaggs’ death, having been involved in similar distributions since 2017.

A Drug Enforcement Administration investigation revealed that Kay regularly dealt fentanyl pills to Skaggs and other staff at the Angel Stadium where they worked, according to an affidavit in support of the criminal complaint.

In August, Skaggs’ family said the incident had been “completely out of character” and vowed to find out exactly what had happened after being “shocked” to learn that Kay could have been involved.

Kay’s attorney, Michael Molfetta, told CNN that his client was “dealing with his own demons.”

“He’s going to be blamed for this,” he accepted. “He doesn’t feel good about that, for obvious reasons.”

When Kay was charged in August, US Attorney Erin Nealy Cox described the tragedy as a warning to anyone taking risks with substances.

“Tyler Skaggs’s death, coming as it did in the midst of an ascendant baseball career, should be a wake-up call,” he declared.

“It should prove to his many, many fans that no-one is immune from the deadly, addictive nature of these drugs, whether sold as a powder or hidden inside an innocuous-looking tablet.”

Court records showed that Skaggs had sent text messages to Kay the day before his death asking him to make a late-night delivery of pills to his room.

The Angels have said that they have been working with law enforcement authorities and hired an independent investigator to examine Skaggs’ death.

A team statement in August added: “We learned that there was unacceptable behavior inconsistent with our code of conduct, and we took steps to address it.

“Our investigation also confirmed that no one in management was aware, or informed, of any employee providing opioids to any player, nor that Tyler was using opioids.” 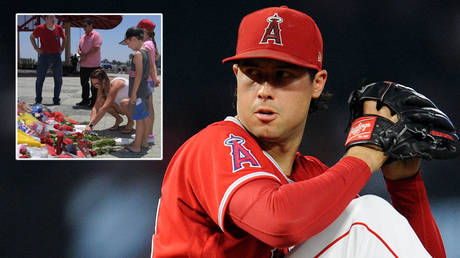 Khabib vs Gaethje ‘only...

Macron’s clampdown on radical Islam is backed by most French, but should’ve been done in more conciliatory way – Austria’s ex-FM

Jeremy Corbyn suspended: 5 bombshell revelations in report including staff ordering party NOT to investigate him