‘For the tranquility of Diego and his family’: At-risk Argentina legend Maradona tested for Covid-19 after positive contact

‘For the tranquility of Diego and his family’: At-risk Argentina legend Maradona tested for Covid-19 after positive contact

Gimnasia La Plata manager Diego Maradona will be tested for COVID-19 on Monday as a precaution after club striker Nicolas Contin tested positive for the virus.

The Argentina legend was in the forward’s proximity in last Wednesday’s friendly with San Lorenzo.

While there was reportedly minimal contact between the two and Maradona – who has not shown symptoms – wore protective gear, he is to be tested.

In accordance with provisions made by Maradona’s personal physician, sports journalist Sebastian Sanchi said of the case: “The contact that Diego had with the striker was outdoors, with a correctly placed chinstrap and he was never in direct contact with Contín for a period greater than 15 minutes.

“In the same way, for the tranquility of Diego and his family, on Monday we will perform the swab.”

In a statement, Gimnasia said Contin was tested last Thursday after developing symptoms and the results came back positive the following day. However, he is said to be in “good health” and is in isolation while his recovery is monitored.

Contin’s teammate Eric Ramirez is also in isolation after sharing a car with him to the stadium on Wednesday.

In August, Maradona was advised to stay away from Gimnasia training for three weeks by club doctor Pablo Del Compare, as he is considered to be especially at-risk due to his age, weight, high blood pressure and having recently undergone an operation.

The 59-year-old underwent surgery in January last year after suffering internal bleeding caused by a hernia.

He has also had numerous health issues over the years brought on by substance and alcohol abuse, including two gastric bypass operations and a stint in hospital with severe heart and respiratory problems.

It’s clear from the protective face shield he and his seven-year-old son Diego Fernando wore during the San Lorenzo friendly that the Argentina legend is taking the coronavirus seriously.

Is that Diego Maradona or the new live action Buzz Lightyear? pic.twitter.com/OSvHGrk1fj

Maradona reacted angrily to the jokes and hit out at those who made fun of him on Instagram.

“Today I left my house with this mask, which my doctor recommended,” he said.

“It is the same one being used by some doctors. I did it out of duty and respect for those who have died from COVID-19. And I was met with some mockery from adults, from boys and from some journalists.

“It would be good for them to understand that they cannot sell themselves at all costs, without respect for anything or anyone. Agree on it, guys.”

Maradona, who is considered among the greatest players of all time alongside the likes of compatriot Lionel Messi, Brazil legend Pele and Cristiano Ronaldo, played a key role in Argentina winning the FIFA World Cup in 1986.

He was handed a 12-month extension to his deal at Gimnasia in June.

The club were 19th out of 24 teams in Argentina’s Primera Division when it was shut down in April in response to the pandemic, with relegation suspended for two years. 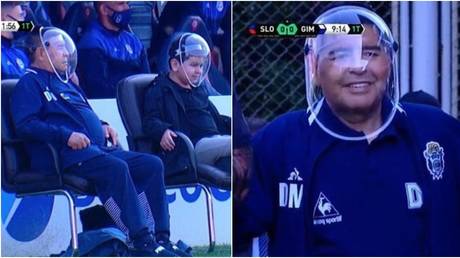