‘FOR social injustice’? US men’s soccer team signals virtues with tracksuit messages… but some fans are left confused

‘FOR social injustice’? US men’s soccer team signals virtues with tracksuit messages… but some fans are left confused

The US men’s national soccer team signaled their virtues front and back as they took to the field for a friendly against Wales on Thursday, displaying social justice messages that left some fans scratching their heads.

US players and coaches lined up for the pre-match anthems at the aptly named Liberty Stadium in Swansea with tracksuit tops emblazoned with ‘Be the Change’ across the front and personalized messages of hope and justice on the back.

Even in an age of sport infused with gushing social messaging, this seemed to be stepping things up a notch.

Perhaps the team were taking a leaf out of US women’s star (and relentless social crusader) Megan Rapinoe’s book, or possibly they were just making up for lost time, not having played a match since February.

READ MORE: There’s no pleasing Megan Rapinoe! Even when she gets ‘social justice’, it’s a ‘disgrace’ it didn’t come quick enough

In any case, examples of the messages in bold across the players’ backs ranged from the generic – forward Timothy Weah opted for ‘WORLD PEACE’ – to the mildly more specific, such as the call from midfielder Owen Otasowie to ‘END POLICE BRUTALITY’.

The messaging was lapped up by many of the nation’s soccer fans, although some were left confused by the slogan of choice from Juventus midfielder Weston McKennie, who had ‘FOR SOCIAL INJUSTICE’ printed across the back of his jacket.

You might have had to scratch your head a bit, but you knew what he was getting at.

Why is Weston McKinnie FOR social injustice!?!

Others were more concerned by whether such lofty ideals would reach a wide enough audience, considering soccer’s weaker profile in the US behind the likes of basketball, American football and baseball.

A Thursday night friendly in south Wales might not have added to the appeal, either.

Strong message to the 3 people that watch their games

Explaining the tracksuit messaging, the USMNT’s website said they had wanted to “send and spread a meaningful message.”

“With the goal of inspiring action on social justice issues, all of the players had ‘Be the Change’ adorned on the front of their anthem jackets,” a statement read.

“The spirit of their message is that each and every person has the ability, opportunity and responsibility to make a difference in our own way.”

On the pitch, an American team brimming with young debutants was held 0-0 by a second-string Wales side, although US head coach Gregg Berhalter at least had the chance to see his team in action for the first time in more than nine months. Next up is a friendly against Panama in Austria on Monday.

Wales meanwhile were without manager Ryan Giggs, who has stepped down temporarily following his arrest on suspicion of assaulting his girlfriend earlier in November – claims which the former Manchester United winger has denied. 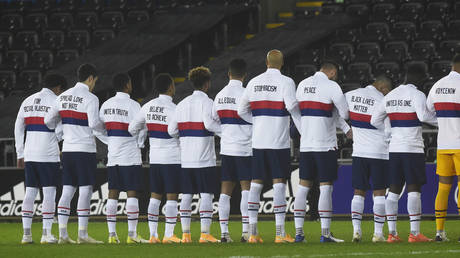