Stunned fans watched one of the most incredible results in English footballing history play out as Hull City, who were in the Premier League three years ago, lost 8-0 at Wigan after being 7-0 down at half-time.

Entering the match on a dismal run of just one win in 19 matches, relegation-haunted Hull knew a much-needed victory at midtable Wigan would provide a massive boost to their hopes of avoiding the drop this season.

Within two minutes, though, they were a goal down in their attempt to end a run of three successive defeats, with rookie manager Grant McCann already fearing the worst as he reportedly told his out-of-form players to “calm down, for f*ck’s sake” from the touchline.

The beleaguered Tigers seemed to settle down after that awful start until their hosts struck again after 27 minutes – and they capitulated from there.

Wigan, who had been the second-lowest scorers in the division, added five more goals in little more than 13 minutes before the interval, averaging a goal every two minutes in the closing moments of the half.

Hull fans spent half-time berating their side, enduring cruel jokes from rival supporters and consulting analysts and statisticians who were already scanning the record books.

Their side made a respectable start to the second half, keeping Wigan out for 20 minutes before youngster Kieran Dowell completed his hat-trick with a goal that ensured Hull matched the worst defeat in their history.

That was in November 1911 against Wolves, although City at least managed not to surpass it, even having strong claims for a penalty in the closing stages.

You may laugh at the Hull score, I’m just glad the lads are social distancing.

A joint record defeat and a national laughingstock. A defeat that encapsulates the last few years of total mismanagement from the top of the club. Fans deserve better than this. #hcafc@bbcburnsy @mattdeanbbc @PJBuckingham @AdamCrafton_

Although Hull’s hurtle down the table has been extraordinary by any standards, the club was already in crisis with fans protesting against its owners and a captain and vice-captain who were ruled out of contention for selection when their contracts expired at the end of June.

Top scorer Jarrod Bowen left for Premier League West Ham on January 31, although by that time the club had already not won a league game since New Year’s Day – a winless run that is still ongoing.

They now have two matches left to save themselves from dropping into the third tier, standing one point shy of safety while all of their immediate rivals now have an extra game in hand – and superior goal difference tallies – over them.

“A defeat that encapsulates the last few years of total mismanagement from the top of the club. Fans deserve better than this.” 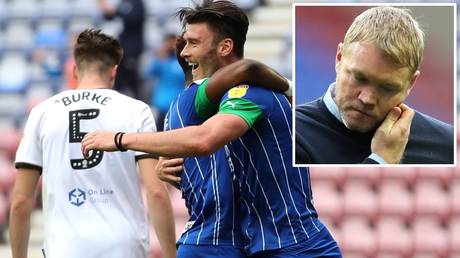 Armenia says it shot down Azerbaij...