One of the most bizarrely engrossing rows ever to grip social media will have at least one more chapter with reports that footballers’ wives Rebekah Vardy and Coleen Rooney are set for a £1 million High Court libel battle.

Rooney – wife of former England and Manchester United star Wayne – became the unlikely author of one of the most celebrated pieces of prose ever to grace social media when last year she accused Vardy, who is the spouse of Leicester City striker Jamie, of leaking stories to The Sun newspaper in a bid to besmirch her reputation.

Building up the tension in a manner seasoned writers would be proud of, Coleen Rooney detailed her extensive sleuthing efforts to ensare the supposed offender behind the leaks, famously revealing the alleged culprit with a suspense-filled last line of: “It’s… Rebekah Vardy.”

The bitter row between the two former friends led to Coleen Rooney, 34, being dubbed ‘Wagatha Christie’ in a nod to her detective skills and the acronym – Wives and Girlfriends (WAGs) – typically attached to the partners of English football’s high-profile stars.

However, Vardy, 38, has always denied that she was behind the leaks to the newspaper, and is now reportedly taking Rooney to court to sue her for libel in a lawsuit that could reach £1 million ($1.25 million).

No details of the case have been made public, although both sides are said to be willing to take a stand to defend themselves.

Vardy is believed to be more interested in receiving an apology for the explosive claims, rather than any financial atonement.

The pair are said to have previously been close after bonding at the Euro 2016 tournament in France, where their respective partners were both in action for England, although the row has led to an explosive and very public rift.

Rebekah and Jamie Vardy have been together for more than six years and have three children together, while both also have children from previous relationships.

Coleen Rooney is one of the best-known WAGs in the game, having been with husband Wayne throughout his rise from Everton schoolboy sensation to Manchester United and England all-time top scorer. The couple have four sons together.

Despite their famous husbands, both Rebekah Vardy and Coleen Rooney have established names for themselves in their own right, being mainstays of the UK’s glossy magazine industry, making TV appearances and featuring as the face of household brands. 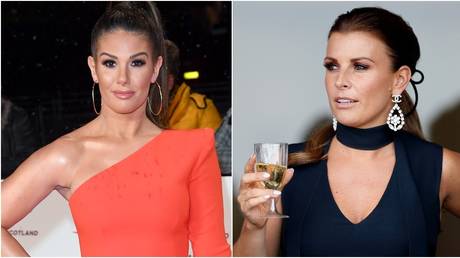 Breathtaking snaps of our gorgeous...