Shocking footage has emerged of the moment when Ivan Zaborovsky, of Znamya Truda in the third tier of Russian football, was struck by lightning during a training session in a freak accident that hospitalized the teenage goakeeper.

The footage of the painful incident shows Zaborovsky running up to take a shot at an empty goal during the warm-up while his outfield teammates train nearer the edge of the pitch in the foreground.

With no-one around him, the 16-year-old is suddenly seen being engulfed by a puff of dark smoke as he approaches the ball on the edge of the penalty area.

Zaborovsky was transported from Orekhovo-Zuev to a hospital in Lyubertsy, where he is continuing to be monitored.

The account responsible for the footage, taken from almost level with where the lightning bolt appears to have struck, said Zaborovsky had been put in an artificial coma after being admitted to intensive care in a serious condition.

A club update reproduced the clip and said that Zaborovsky was in a stable but not life-threatening condition, having returned a normal cardiogram after suffering “severe burns”.

“Everything went quickly, very professionally, an ambulance arrived in eight minutes. [Zaborovsky] most likely stopped breathing, they gave him first aid, the young lad is most likely alive thanks to that,” said Igor Mayorov, the General Director of Truda.

“Last night we sent him from Orekhovo-Zuyevo to the hospital in Lyubertsy. He had an ECG, his heart is fine, tomorrow the doctors will monitor him.”

Mayorov dismissed claims by some fans on social media that training should not have taken place when there was a risk of extreme conditions.

“There was a clear sky, albeit overcast – neither rain nor wind,” he explained.

“If there was a thunderstorm, then we would not have trained – the coach would have taken the players to the gym.” 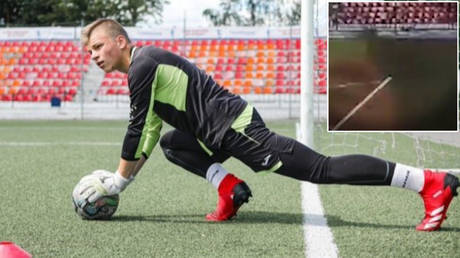