Fresh off his outstanding performance in Juventus’ 4-0 win over Lecce, Cristiano Ronaldo decided to make a statement off the pitch, with a summer outfit that garnered more than SEVEN MILLION reactions online.

Ronaldo shared a pic of himself wearing a white short-sleeved shirt featuring a striking large multi-colored flower print, and a pair of light blue shorts featuring the same print.

To complete his look, he donned a pair of round wire-rimmed glasses and a pair of white box-fresh sneakers.

The Portuguese star’s summery new look attracted a staggering amount of responses, with more than 7.5 million Instagram users clicking the “like” heart to show their approval for the Juve star’s outfit.

There were thousands of replies too, including from five-time football freestyle world champion Andrew Henderson, who exclaimed, “Flower power!”

Thousands of users replied with thumbs-up emojis, fire emojis and approving comments, but Ronaldo’s look didn’t sit well with everyone who laid eyes on his multi-colored outfit.

The summer look didn’t get a like from Instagram user Javier Pingarron, who took the time to give a short, one-word, assessment of the global football superstar’s choice of clothes.

“Awful,” he posted, with a thumbs-down emoji to remove any lingering doubt. 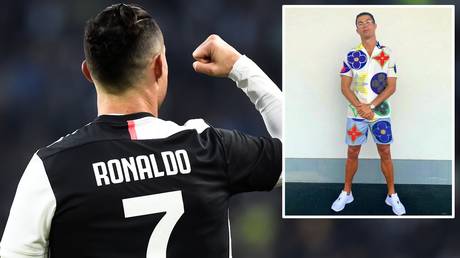