Close
Trending News
HomeSportFlirty love: Nick Kyrigos says he has moved on from Russian tennis player Anna Kalinskaya but admits his mind is a ‘f*cked place’

Flirty love: Nick Kyrigos says he has moved on from Russian tennis player Anna Kalinskaya but admits his mind is a ‘f*cked place’

Flirty love: Nick Kyrigos says he has moved on from Russian tennis player Anna Kalinskaya but admits his mind is a ‘f*cked place’

Tennis ace Nick Kyrigos has posted a series of smitten photos after replying “bed time” to a photo by Chiara Passari – but the Australian who claimed he slept with fans every week says he is still experiencing inner turmoil.

Controversial Kyrgios has been busy while tennis has been suspended, admitting that he would drink beer all the time if he was allowed to and claiming that he has slept with fans on a weekly basis.

Now the 25-year-old has revealed photos of himself relaxing with new girlfriend Chiara Passari, providing a romantic end to a week in which he called Novak Djokovic’s Adria Tour “boneheaded” and criticized the world number one’s coach and father after four players who took part in the tournament tested positive for Covid-19.

“Ride by your side,” wrote the world number 40 alongside a photo of himself driving through Canberra with Passari, who nudged her sunglasses forward to look at the camera while Kyrgios kept his eyes on the road.

He then posted a more playful photo of himself being embraced by Passari at a table, adding: “Happiness is found.”

Kyrgios originally sparked rumors that he was seeing Passari when he responded to a photo by Passari of herself wearing leather trousers in a lift by flirtily writing: “Bed time.”

Russian tennis star Anna Kalinskaya confirmed she had broken up with Kyrgios last month but later denied that she had been referring to him when she wrote “f*ck energy vampire” and “you’re not a bad boy, you are simply a bad person” in a now-deleted post.

Kyrgios was back on court at the city’s Tennis World facility on Sunday, returning shots in a pair of basketball shorts and Nike Air Jordan shoes while assuring his following of more than 1.4 million that he was working hard.

There was a strong hint of the inner volatility that has seen Kyrgios become known as one of sport’s most temperamental stars after the session, though, as he portrayed himself sitting against the court fence while declaring: “My mind is a f*cked place.” 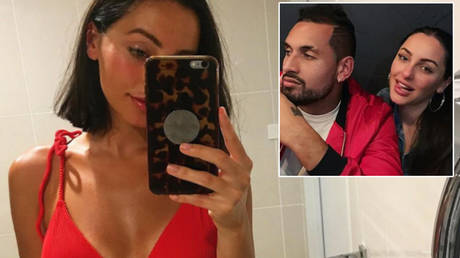