Shocked boxing great Natalia Ragozina has filmed the moment when she was allegedly confronted by an air stewardess over her decision not to wear a mask on a plane, venting her frustration and accusing the airline of being zealous.

The longest reigning WBA and WBC female super middleweight champion was dumbfounded after being challenged by a cabin crew member as she sat in her seat with a cup of water while not wearing a mask.

In the Instagram video, “Miss Sledgehammer” zooms in on the name badge of the employee, Anzhela, and accuses her of “spoiling the mood right away”.

“Are people now angry in an epidemic?” asked the unbeaten Russian.

“Or am I a scandalous girl? I came without bothering anyone, on time. The plane was late.

“My dream during my childhood was to become a stewardess in childhood, but when I meet such people… [they are] deliberately provoking a scandal.”

The attendant was wearing a mask and gloves and other passengers on the flight could be seen donning facial protection while seated.

Ragozina showed herself wearing a mask during the flight in a separate story on the social media platform before again portraying herself having taken it off and, later, sitting mask-free on a train.

The 44-year-old used her post to appeal to Vitaly Savelyev, Russia’s Minister of Transport and the former chief executive of the Aeroflot airline she was flying with, to investigate.

“Vitaly, with all due respect, make an audit,” she told the politician, asking her fans to share their experience with the firms with her as part of a later post she had planned.

“Otherwise there will definitely be a scandal. This is not the first time.”

The video racked up almost 30,000 views in less than 24 hours. “The absurdity is that you sit in a mask for the entire flight and eat without it,” one fan told Ragitova.

Another said: “We pay such a lot of money and they are rude to us for it. A stewardess must know and observe the chain of command.

“You need to be kinder to people and more respectful, especially to the world champions.”

Ragozina held nine belts and had a perfect 22-fight record when she retired in 2010, and has subsequently remained well known as a broadcaster and public figure.

The Kazakhstan-born veteran provided TV analysis on heavyweight Alexander Povetkin’s knockout win over Dillian Whyte earlier this year, posing with the champion and wishing him luck shortly before his victory in England.

Posing on a boat in a swimsuit days before her in-flight altercation, she admitted that she reads comments from her following of more than 50,000 on Instagram.

“Everyone has their own opinion and there are no ideal ones,” she ruminated.

“I have crooked fingers, I have no taste, no brain, am not rich and not beautiful, have big breasts and so on.

“My friends, I am what I am and do not change. The most important thing remains in me – my kind heart and human soul.”

Aeroflot did not make an immediate public response to Ragozina’s allegations. 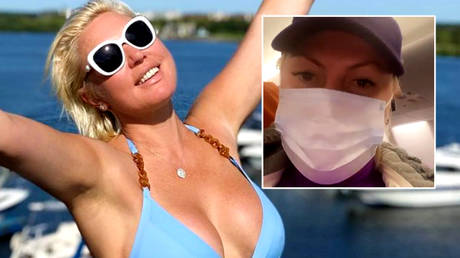