Tamara Tansykkuzhina, the Russian checkers genius who lost a round after a damaging distraction when her national flag was abruptly removed mid-game, has celebrated after coming from behind to win the World Championship in Warsaw.

In the culmination of a showdown that had proved unexpectedly controversial, Tansykkuzhina took her seventh title in the most dramatic of circumstances, effectively winning on a time-restricted tie-break after her opponent, Polish titan Natalia Sadovskaya, had required a single point to claim the crown.

Sadovskaya, who is second only to Tansykkuzhina in the rankings, sank her head towards the board at the end, looking suitably crestfallen after losing by the narrowest of margins after being comfortably ahead earlier in the final.

“We won,” Tansykkuzhina told her fans, adding three exclamation marks in an expression of her ecstasy at the end of an epic that had lasted almost two weeks. “Time to go home. Thank you for the overwhelming support.”

Russian Tamara Tansykkuzhina became a seven-time world champion in draughts!
All these days I finished playing without the flag, it (despite apologies for the scandal) was not returned!
And still won!
A hero! pic.twitter.com/l2EAwRqmMZ

This year’s World Championship will be indelibly remembered for a bizarre incident in the fourth round, when the Russian flag next to Tansykkuzhina’s name on the table was abruptly swiped by the tournament secretary following an apparent order from the World Anti-Doping Agency (WADA), which is currently enforcing a two-year ban on Russian athletes and sportspeople competing under their flag at international competitions.

The scandal sparked a sporting, political and diplomatic row that resulted in a flurry of accusations, apologies and statements, including fury that Tansykkuzhina had lost her concentration and a round because of the unwanted distraction, as well as a response from Russian president Vladimir Putin’s office.

Congratulating Tansykkuzhina after her ultimate triumph, State Duma Deputy Dmitry Svishchev questioned WADA and praised Sadovskaya for her “deed of respect” in removing her own flag as an act of solidarity.

Tamara not only recovered, but went on a winning streak and secured a win! pic.twitter.com/6Cb1dR5ZGO

“I really hope that this will not happen again in the future,” he said to Championat, looking towards major events such as the Tokyo Olympic Games scheduled for this summer.

“Of course, I cannot fail to note the boorish attitude of the organizers towards our athlete. Unfortunately, for some reason we cannot provide our athletes with normal diplomatic support at tournaments.”

The Polish hosts apologized for the incendiary incident, while WADA bosses clamed that they had not insisted on the flag being removed while the sporting action was taking place.

Reflecting on Tansykkuzhina’s 32-16 deficit after the fourth round, Oleg Dashkov, the Vice-President of the Russian Draughts Federation, acknowledged: “Of course, that flag incident had an impact, had an impact on [Tansykkuzhina].

“Then she lost out of the blue. But she was able to answer with dignity and win.”

Sadovskaya was gracious in defeat after what she described as “two hard weeks of fighting, nerves and emotions.”

“We all hoped for a happy ending, but this is probably what sport is all about and why we love it so much,” she told her thousands of Instagram followers.

“What I’ve been dreaming about for years has just come true. The daily match audience records speak for themselves – you have found out how difficult and demanding a sport this is.

“I believe that everything in life has a reason and a lost battle will turn into something new and beautiful. Thank you so much for hundreds of messages – I have the best fans in the world.” 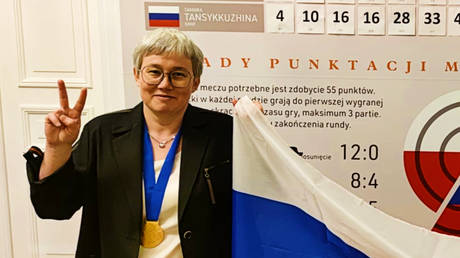