Maria Sharapova may be retired from the professional tennis circuit, but that hasn’t stopped her from training hard as she keeps her body in top shape in the Florida sun.

The former world No. 1, who won all four of tennis’ Grand Slam tournaments – including two French Open titles – during her glittering career on court, announced her retirement after her exit from the Australian Open in February.

READ MORE: ‘I always said I would put my health at the heart of my decision’: Simona Halep confirms she WILL NOT play at US Open

But the 33-year-old, who now resides in Florida, USA, continues to train and has shared a host of videos on her Instagram showing her staying in shape during the COVID-19 lockdown.

Her latest post saw her slamming a medicine ball repeatedly into the floor, and performing single-leg squat thrusts on a gym mat while on a sun-drenched American football field.

She also performed lunches and ran the steps of the bleachers at the venue, while the video of her training regimen was accompanied by Justin Timberland’s “Can’t Stop The Feeling!”

Sharapova’s accompanying message empowered her followers to get up early and smash their personal goals as she posted, “Early birds get the worm. #DoNutStop #FitandLit”

Her post attracted more than 100,000 likes, and thousands of comments complimenting her on her efforts, and her physique.

One posted, “You are retired from tennis and are still in great shape,” while another gushed, “Fitness is a habit, not a chore. Awesome!!”

The US Open gets underway on Aug. 31 at Flushing Meadow, New York, with players set to compete in a bio-secure “bubble” during the tournament.

The field has been hit by a number of withdrawals, including the sport’s two top-ranked women’s players, Ash Barty and Simona Halep, while last year’s men’s champion Rafael Nadal has also announced his non-participation in the event. 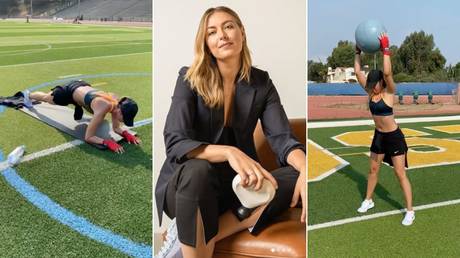