Juventus manager Andrea Pirlo has praised Cristiano Ronaldo’s work ethic and spoken of his importance to the team as they pursue their 10th consecutive Serie A title.

“Ronaldo works very hard. He is the first to come to training and the last to go home,” said the Italian, Goal reported.

“He brings enthusiasm, you can notice it on the pitch as well. He started the season really well, I hope he will keep doing like this until the end of the season.

“I wish he’ll score one or two goals every game. He is really important for us. In Rome we were a man down and he helped a lot until the end of the game. He is an example for everyone.”

The Portuguese superstar’s work ethic has been no secret throughout his career, and he regularly offers insight into his training on social media.

Despite turning 35 in February, Ronaldo’s supreme conditioning and relentless pursuit of goals has kept him at the top of the game, even if he’s no longer quite as explosive as he once was.

The forward has conjured 68 goals from just 91 games since he joined Juve from Real Madrid in 2018, including 37 in all competitions last season.

He has started the 2020-21 campaign well, with three goals in the Bianconeri’s first two games.

Ronaldo notched the final goal in Juve’s 3-0 win over Sampdoria, before netting both strikes as the Old Lady twice came from behind to draw 2-2 with Roma.

The former Real man will come face-to-face with his eternal rival Lionel Messi in the UEFA Champions League group stage this season, with Juventus having drawn the Argentinian’s Barcelona.

“We are in a very good group,” Pirlo said of the draw. “It’s always great to face Barcelona because it brings more responsibilities and attention to our players.”

Ronaldo has netted a record 130 goals in the Champions League, while Messi has scored 115. 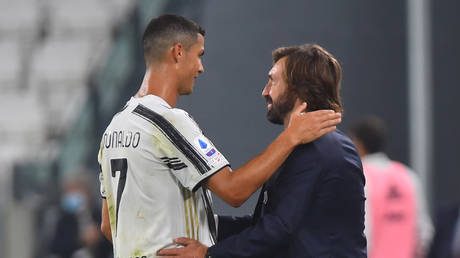