The new woke dictionary definition of ‘brave’ has come to mean ‘selfishly letting down your teammates’, judging by Simone Biles’ cringingly tense exit during the gymnastics team final at Tokyo 2020.

On a Tokyo Tuesday night at the Ariake Gymnastics Centre, the chalk dust had just about settled from Simone Biles’ opening vault in the artistic all-round team event final.

The camera inside panned to the most decorated American gymnast of all-time caught in hushed conversation with her coach, seemingly underwhelmed by her own performance.

After a few moments of muted pause and a soft mutter, Biles’ face cracked and her look was suddenly resolute. Her mind was made up: she was quitting.

Apropos of absolutely nothing, Biles withdrew from the final and deserted her teammates, costing them the gold medal as a full-strength Russian Olympic Committee team was now playing with a one-woman advantage.

The US team clinched only silver, losing out to the Russians, despite being dead certs for Tokyo’s top prize, and the collective dream was snubbed out on a whim because the star athlete “didn’t feel right”.

Although USA Gymnastics, an institution infamously adept at alleged cover-ups, originally put Biles’ withdrawal down to a “medical issue”, the 24-year-old refuted that claim in a buzzword-laden bundle of excuses and empty platitudes in the aftermath.

“I didn’t want to go into any of the other events second-guessing myself. So, I thought it would be better if I took a step back and let these girls go out there and do their job,” Biles bleated to a media that fawned over every cliched utterance.

Almost instantaneously, the usual virtue-signalling usual suspects in US media lined up for their identity parade, each spinning yarns about Biles’ courage of which Verbal Kint would be proud and suddenly the word ‘brave’ was rebranded.

Biles was “astonishingly brave” for hypothesizing she could be “dragged out [of the Olympics] on a stretcher”, which, even for someone of Biles’ suppleness, is an impressive stretch to go from ‘wrong headspace’ to near death in the space of a vault routine.

Simone Biles has just given an astonishingly brave interview to a packed mixed zone, talking about mental health issues.

‘Even though it’s so big, it’s the Olympic games. But at the end of the day it’s like we want to walk out of here, not be dragged out here on a stretcher’

Your health and peace matters. You’re reminding Black women that we can take the space we need for ourselves.

Another praised her message to fellow females, gushing “it’s also important that girls see women who are brave enough to put their health and well-being ahead of anything else,” which is an apparent approval of showing strength and bravery towards other women by leaving your fellow sisters high and dry when they need you the most.

Bile’s reasoning she was suffering from mental health issues is problematic, a phrase which has now become an umbrella term for suffering even the simplest of human emotions, and detracts from deeper suffering.

But manipulation of words isn’t a new phenomenon, and language has been gradually butchered and bastardised by social justice warriors hell-bent on policing speech and celebrating weakness in their woke heroes.

Another beneficiary of the brand-new brand of bravery was Naomi Osaka, who announced she wouldn’t conduct mandatory media assignments at the 2021 French Open, citing mental exhaustion and later withdrawing from the tournament altogether.

The four-time Grand Slam champion did however muster the mental strength to appear on the cover of Sports Illustrated’s swimsuit issue, a magazine regarded as the bible of unattainable body image, criticised for creating unhealthy attitudes toward conventional beauty among teenage girls, and famed for lampooning feminists who accuse them of ‘dehumanising women’.

Earlier this month, nauseatingly woke name-inventors Vagina Museum implored their followers to replace the word ‘women’ with the term ‘people who menstruate’. Those who disagreed with such ludicrous language-policing were labeled bigots.

“I’m sorry. I love you guys… You guys have trained your whole entire life for this I’ve been to an Olympics, I’ll be fine. This is your first… you go out there and kick ass”

JK Rowling, perhaps one of the great wordsmiths of modern times, has been admonished for her non-conformity to invented language and received a novels-worth of death threats penned by the ever-so-tolerant saints of social justice who purport to create a safe space for all by cancelling those who dare to disagree with their narrative.

At least the tiptoeing through the minefield of using the correct gendered pronouns didn’t apply to Biles, who loved being referred to as the G.O.A.T (Greatest Of All Time) so much, she ordered custom-made leotards with a diamond encrusted goat images so that her aura of invincibility now had a visible reminder to all other athletes with the goal to ironically gain a mental edge.

When Simone Biles texted leotard company GK Elite asking for a goat on her leotard, there was initial debate over whether the image would be too brazen. But Biles earned the right to be bold when she won four Olympic gold medals and seven national titles. https://t.co/pmaVbO0xFC

Biles is undoubtedly a woman of major mettle; aside from her voluminous medal haul, she and other US gymnasts survived harrowing sexual abuse at the hands of pervert ex-team doctor Larry Nassar and provided testimony that sent the disgraced paedophile to jail for life, receiving the Arthur Ashe Courage Award for doing so.

Bucket loads of bravery deserving of all the medals and plaudits you could put together and then some.

Quitting when things are getting a little difficult is not brave, and no amount of enforced vernacular gymnastics can change that. What happened on Tuesday was the grandstanding of a one-woman show whose star deiced to grab center stage when her limelight was dimming at the expense of her colleagues.

In a world where language is a labyrinth of banned gendered words, triggers, and misused pejoratives, and seemingly any speech context and word definition can be distorted to fit any given narrative, the true meanings of ‘brave’ and ‘mental health issues’ must be preserved, and not to excuse and celebrate woke weakness and ostentatious stands for social justice. 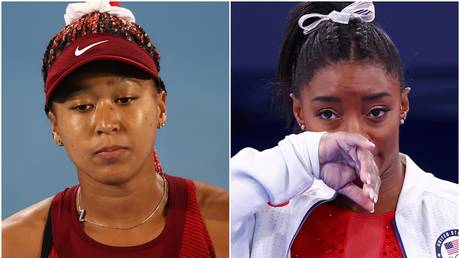