The scorecards might have called this a split decision but Rafael Dos Anjos left little doubt as to the victor in his dominant win against Paul Felder in Las Vegas, but one dissenting judge has come in for heavy criticism.

Dos Anjos, a former champion at 155lbs, displayed a vintage performance in easily bypassing short-notice fighter Felder in the UFC Vegas 14 main event late Saturday, but it wasn’t without some controversy.

After 25 minutes of action in which Dos Anjos was utterly dominant it seemed to be little more than a formality when the scorecards were being announced. Two judges quite correctly called the fight for the Brazilian by a score of 50-45 but the third, Chris Lee, who has a history of being involved in split decisions this year, inexplicably awarded the fight to Felder by a score of 48-47.

Michael Bisping after the fight, “That judge who scored Felder needs to take a long look in the mirror and maybe find another job.” 👀😂 #UFC pic.twitter.com/J8nrbmkgK9

Despite the scorecard suggesting that the fight was close, it most certainly wasn’t. Felder, who took the fight on just five days’ notice as a replacement for original headliner Islam Makhachev, was second best throughout to the former lightweight champ who was returning to the division he once ruled after an eight-fight stint at welterweight.

And by the time the fight reached its conclusion, there appeared to be only one man inside the UFC Apex facility in Las Vegas, Felder included, who thought that the American did enough to win the fight.

Judge Chris Lee, who scored the main event for Paul Felder, has been involved in 10 UFC/Bellator split decisions in 2020 and was the dissenting judge in 7 of them.

That judge who scored it 48-47 should not judge another UFC fight for a very long time.

The judge who scored that 48-47 for Paul Felder should never judge another fight again.

“I’m not too happy with my performance,” Dos Anjos said when assessing his victory. “It was my first fight back in the lightweight division. I feel there’s more adjustments I need to make.

“I think if Khabib is really retired, it will leave the division wide open,” Dos Anjos added. “If you look to the contenders, I think only me and Conor [McGregor], we are the only real champions in that division. Everybody else is all interim champions. I think if the division is open, me and Conor is the fight to make.”

Dos Anjos and McGregor were scheduled to meet once before but a foot injury ruled then-champion Dos Anjos out of a lightweight title defense against the Irishman. Nate Diaz instead took the fight and, well, the rest is history.

Respect to both men for making this fight and event happen tonight.
Good fight!
I’m in for sure.

Dustin first, but I’m down for it all. Throwback to this classic lol.
Look at Dana hahahah
Vintage MMA entertainment.
El Chap! pic.twitter.com/GiC3yl8HB6

McGregor, who was watching the broadcast, noted that it was a “good fight” and responded to Dos Anjos’ challenge to say that he’s “in for sure” but that “Dustin is first“.

Felder, meanwhile, admitted after the fight that he hadn’t visited an MMA gym in around four months but accepted the fight following Makhachev’s withdrawal due to its high-profile nature, and also because he considered himself to be in pristine shape due to currently being in training to compete in a triathlon.

‘The Irish Dragon’ confirmed afterwards that this wasn’t to be his last fight in the Octagon, having suggested following February’s defeat to Dan Hooker that his time as an active competitor was coming to an end.

“I’m not going anywhere right now,” Felder said afterwards. “I can tell you I’m not done. I might lose my ranking a little bit but what I’ve learned in this sport is none of that matters. What matters is going out there, showing up, showing who you are inside, what determination you have.” 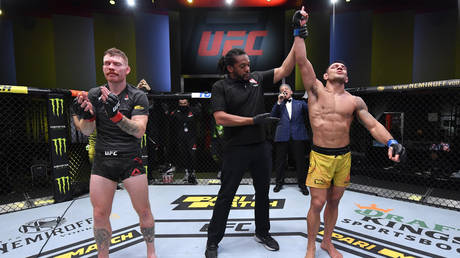