UFC welterweight contender Jorge Masvidal will take part in a series of campaign events in Florida which has been dubbed ‘Fighters against Socialism’ to aid the re-election campaign of Donald Trump.

Masvidal, who is a supporter of President Trump, will join the US leader’s son, Donald Trump Jr, in the series of campaign stops in Tampa, Orlando and Miami this coming Saturday, with a final rally being held at the American Top Team facility in Coconut Creek.

Several other professional MMA fighters are expected to be present and will join the campaign event at the ATT gym. News of the campaign stop was first announced by ESPN’s Ariel Helwani on Tuesday.

“They will hold 3 rallies in Tampa, Orlando and Miami. Their final rally will be at the American Top Team gym where they expect numerous fighters to join.”

Jorge Masvidal will join Donald Trump Jr. on a day long “Fighters Against Socialism” bus tour across Florida this Saturday. They will hold 3 rallies in Tampa, Orlando and Miami. Their final rally will be at the American Top Team gym where they expect numerous fighters to join.

“The anti communism bus tour will be arriving at a city near you,” Masvidal later tweeted, adding his “super necessary” catchphrase.

The anti communism bus tour will be arriving at a city near you #supernecessary https://t.co/p8RDrmdKrW

This comes amid several links between the Trump administration and the UFC in recent times. Dana White was invited to speak at the Republican National Convention in late August, while President Trump and his sons have also heaped praise on controversial UFC loudmouth Colby Covington who has used his support of the MAGA movement to amplify his character in recent years.

A few weeks ago, White was present at another Trump rally in Nevada where he was accompanied by Covington, Henry Cejudo, Justin Gaethje, Ali Abdelaziz and others. President Trump also called Colby Covington live on the ESPN broadcast following his recent win against Tyron Woodley – and even more recently, Trump name-checked Masvidal at another rally.

“We have some real champions here,” Trump said of ‘Gamebred’. “And one I heard, in particular, I saw a very fast knockout not so long ago. Where’s Jorge? Where is Jorge? I don’t want to fight with him. Where he is? Where is he? Stand up, Jorge.

“That’s the fastest knockout,” Trump, who was present for Masvida’s 2019 win against Nate Diaz in New York City, added. “I watched his [fight when] he was fighting this young superstar [Ben Askren] who was going to be great, right? They were telling me how great he is.

“I don’t want to hurt anybody’s feelings but he was supposed to be the future of the UFC but he had to go through this guy right here but it didn’t go well [for him]. Did it, Jorge? What a champion you are. That was the fastest [knockout]. What was it? About a second? Two seconds? You ran across the ring and the guy was gone and that was the end of it.

“Did they have to pay you for that evening or not? Because one second… that’s a good return. Great to have you, man.”

News of Masvidal’s alliance with the Trump family may well come as a blow to his chief rival, Colby Covington, who has courted the attention of Trump and his sons for some time now. In addition, it will be curious to see if Covington attends the final rally event in the American Top Team gym – the same venue from which he was recently blacklisted for a series of controversial comments outside the cage. 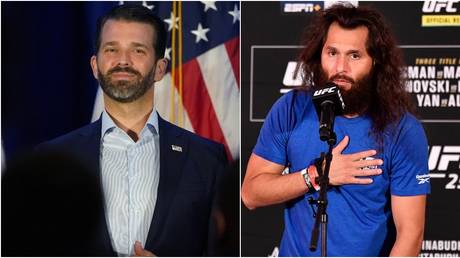 Boris Johnson to give joint press...