Fight off: UFC debutant Umar Nurmagomedov HOSPITALIZED in Dubai as Khabib’s cousin RULED OUT of UFC 254

Fight off: UFC debutant Umar Nurmagomedov HOSPITALIZED in Dubai as Khabib’s cousin RULED OUT of UFC 254

Umar Nurmagomedov, cousin of UFC lightweight champion Khabib Nurmagomedov, has been ruled out of his octagon debut at UFC 254 after it was revealed he has been hospitalized in Dubai.

Undefeated bantamweight Umar was set to face Sergei Morozov on the preliminary card on Yas Island, Abu Dhabi, on Oct. 24, but news agency TASS announced via a team source that the fighter has been forced to withdraw from the fight.

“Umar Nurmagomedov was hospitalized in a hospital in Dubai with severe flu, fever and vomiting,” the source told TASS.

RT Sport understands that Morozov’s management has been informed that the fight with Nurmagomedov is now off, and that the UFC is seeking a replacement to keep the Kazakhstani fighter on the card.

❌ Umar Nurmagomedov – Sergey Morozov fight is OFF as Umar has been hospitalized with flu in Dubai. UFC is currently searching for an opponent for Morozov. This situation puts Khabib vs Gaethje fight is jeopardy as Umar has been part of Khabib’s training camp #UFCFightIsland

Morozov was all set to make his UFC debut at UFC 254 against Nurmagomedov in a fascinating clash between undefeated Russian prospect and the Kazakh M-1 Global bantamweight champion.

But that matchup will have to wait for another day, with Nurmagomedov concentrating on shaking his symptoms and returning to full health.

The situation also raised concerns over the status of Umar’s cousin and UFC lightweight champion Khabib, who is set to defend his title against Justin Gaethje in the main event at UFC 254.

Khabib and Umar were part of the same team preparing for their respective fights in their Dubai training camp, and the team (and the UFC) would have been hoping Khabib didn’t suffer the same health issues that have befallen his teammate and ruled him out of the event.

However, it was subsequently revealed by Khabib that Umar’s illness was due to him battling a staph infection.

UPDATE: According to Khabib’s Instagram post, Umar’s fever has been caused by Staph infection, not flu. Khabib’s team is in currently relocating for Dubai to Abu Dhabi pic.twitter.com/SgyVlipFyL

Posting a photo of Umar in his hospital bed to his Instagram page, Khabib explained, “The last few days, Umar has been in a hotel with a high fever, which was caused by a staphylococcal infection. But despite this, he and our entire team were determined that he would perform on October 24th. This morning, before our flight to Abu Dhabi, he got worse and was hospitalized in Dubai. Get well brother, so it was meant to be.” 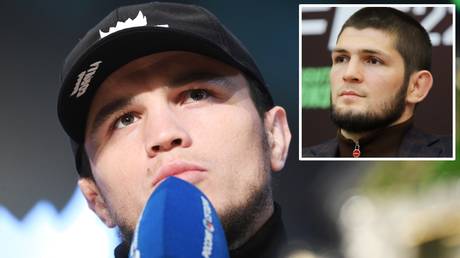