One of the most eagerly-anticipated matchups on October 10’s “UFC Fight Island” fight card is set to be scrapped after light heavyweight contender Volkan Oezdemir was forced to withdraw from his fight with Nikita Krylov.

RT Sport understands that Swiss contender Oezdemir has sustained an injury in the lead-up to the light heavyweight fight, which was set to take place as the co-main event of UFC Fight Night on Oct. 10 in Abu Dhabi.

The matchup, which was due to pit rival contenders Oezdemir and Krylov in a pivotal bout in the UFC’s 205-pound division, with the two contenders both looking to build momentum and push themselves toward a top contender fight at the end of the year, or early in 2021.

Oezdemir expressed his disappointment in an Instagram post, telling his followers, “I’m devastated… I won’t be able to fight due to a knee injury. I apologize to @danawhite @ufc @mickmaynard2 my opponent @nikitakrylovufc and all the fans. I’ll rest and work on the fastest recovery possible to be back in that octagon ASAP.”

Other “UFC Fight Island” fights set to be scrapped include the UFC debut of Poland’s undefeated former two-division KSW champion Matuesz Gamrot, who was due to face Magomed Mustafaev on Oct. 17, plus the matchup between Shavkat Rakhmonov and Elizeu Zaleski dos Santos, who sustained an injury and was forced to withdraw from UFC 254 on Oct. 24.

Krylov returned to the UFC earlier this year and defeated Brazilian contender Johnny Walker via unanimous decision in March, while Oezdemir was looking to bounce back after his knockout defeat to Czech contender Jiri Prochazka in July.

But now their matchup looks set to be scrapped from the Oct. 10 card, with both men set to be removed from the card as a result. 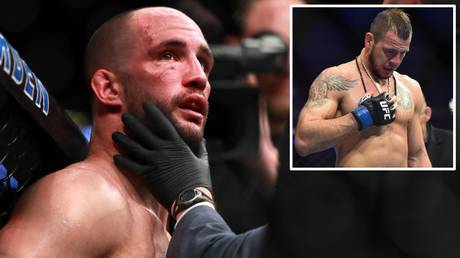