UFC octagon girl Camila Oliveira has been giving fans a cheeky sneak peek behind the scenes at Fight Island as the promotion continues its latest stint in Abu Dhabi with a packed run of events.

Brazilian beauty Oliveira has been doing the honors with the cards between rounds on Yas Island, kicking things off with UFC 253 on September 27 as the UFC returned to the base it has set up to help ride out the Covid-19 pandemic.

In-between events, Oliveira has shown off all the delights that the island has to offer, posing on the beach in a bikini and sharing some intimate snaps from various pools and hot tubs.

Dana White and Co. returned to Abu Dhabi last month for a series of five events in the space of a month, culminating in the lightweight title fight between current ruler Khabib Nurmagomedov and interim champion Justin Gaethje at UFC 254 on October 24.

The next event up is Sunday’s Fight Night card headlined by the featherweight contest between Brian Ortega and ‘The Korean Zombie’ Chan Sung-jung.

A key part of the supporting cast, Oliveira has made her mark in more ways than one on Fight Island, autographing the board where visitors can leave messages as a memento to their stay.

Documenting her stay, the brunette stunner has also shown herself topping up her tan as temperatures reach around a warm 35C (95F), but has also kept in shape by hitting the gym.

On returning to Fight Island last month, UFC head honcho Dana White showed fans the luxuries available during his stay, from his private suite and pool to personal gym.

Some pondered how essential the UFC’s octagon girls would be to the stripped-back version of events held during the pandemic, although many such as Oliveria – who boasts an Instagram following of 275,000 – have become firm stars in their own right.

Responding to comments from social justice warriors that the role should be banned due to ‘outdated’ stereotypes, UFC supremo White said last year: “Our Octagon girls, they’re as much a part of the UFC brand as anyone, they’re ambassadors for our sport.

“So for someone who has absolutely no education whatsoever about who these girls are — about what they do, what they mean to the UFC — to start going off, it’s ridiculous.”

“You can look at any sport you like, nobody treats women better than we do.”

Looking at Oliveira’s Fight Island stay, she might well agree with her boss. 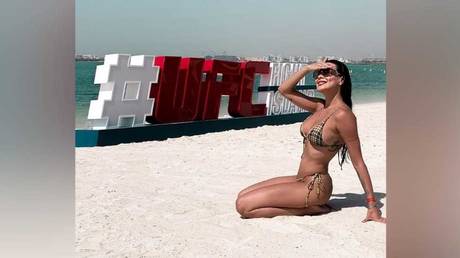