Khabib Nurmagomedov will be back on UFC Fight Island this month but won’t be in action, meaning the lightweight champ was at liberty to indulge in a Dubai banquet laid on by celebrity Turkish chef Burak Ozdemir.

Khabib is well known as having a sweet tooth and looked delighted when Ozdemir brought out a gigantic cake decorated with a UFC belt and Khabib’s name, as the Russian as his team tucked into a feast at the Turkish chef’s CZN Burak restaurant in downtown Dubai.

Photos and footage from Khabib’s teammate Shamil Zavurov showed a table laden with food and Ozdemir cutting open a huge dish which appeared to be stuffed with rice and meat.

Khabib shared a picture alongside the cake prepared in his honor, thanking Ozdemir for “an amazing dinner.”

Ozdemir has treated Khabib before, with the 155lbs champ enjoying an off-season feast in Istanbul back in October of 2019.

The latest banquet was held as Khabib and his team arrived in the UAE, where the UFC lightweight champion’s cousin, Umar, will be making his octagon debut against Kazakhstan’s Sergey Morozov at UFC 257 on January 23.

Khabib has business to attend to in the form of a meeting with UFC boss Dana White to discuss his future, following the undefeated Dagestani’s retirement after he submitted Justin Gaethje at UFC 254 in Abu Dhabi in October.

White has made no secret of his wishes to lure Khabib back for a shot at the 30-0 mark, although the Russian has thus far signaled he plans to stay retired.

With no immediate fight plans on the horizon, Khabib can afford to taste the kind of culinary delights on offer during his latest trip to the Middle East. 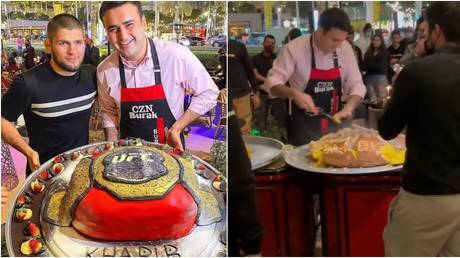