Russia’s Anastasia Gasanova claimed the biggest scalp of her fledgling career as the 21-year-old shocked Czech former world number one Karolina Pliskova in straight sets at the Abu Dhabi Open.

Qualifier Gasanova, ranked a lowly 292 in the WTA standing, emerged a 6-2 6-4 winner against Pliskova in their round of 32 meeting, taking one hour and 17 minutes to get the job done.

For Saratov-born Gasanova, who has mainly competed at ITF events and far less frequently on the WTA tour, it is a major win to start the 2021 season and follows her victory against Germany’s Mona Barthel by the same scoreline in the round of 64.

Gasanova next plays unseeded Spaniard Sara Sorribes Tormo as she bids for a spot in the quarterfinals of the tournament, which boasts a $68,570 prize fund for the winner.

For Pliskova, the defeat was an unexpected one as she bids to build some sort of momentum heading into the Australian Open next month.

The 28-year-old Czech reached the semi-final in Melbourne in 2019, but last year failed to get beyond the third round.

The top seed in Abu Dhabi is 2020 Australian Open winner Sofia Kenin of the US, with Elina Svitolina of Ukraine seeded second. 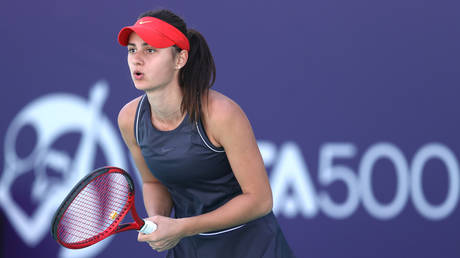