A gymnastics competition in Moscow has ended in tragedy after one of participants, Elena Kustova, died, after sustaining a fatal skull injury.

The accident occurred on Tuesday, while the gymnast was walking across a slackline. The 37-year-old was balancing on highly tensioned flat webbing when a connecting loop suddenly tore, sending a line lock flying to hit her forcefully on the head.

An ambulance arrived at the scene within 10 minutes, and paramedics administered emergency resuscitation for an hour in an attempt to save the athlete’s life. Unfortunately, their attempts were in vain and she died from the injuries.

The organizers of the event said the equipment used at the competition was new and could withstand a weight of up to 300kg. An investigation has now been opened into the supplier of the ill-fated equipment.

In a strange twist of fate, Kustova was involved in a scandal last year, after one of the gymnasts on her team, Evgenia Asonova, fell from a height of eight meters while performing an aerial gymnastics routine at a competition in Riga, Latvia.

She sustained multiple injuries, including a spine fracture, and is still undergoing extensive rehabilitation. 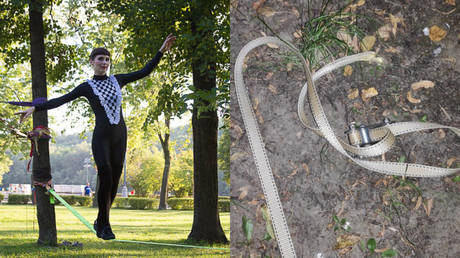 Fresh footage of cops LAUGHING &am...