The English FA have paid tribute to the man whose “Hand of God” at the 1986 World Cup infuriated an entire nation, describing the recently-deceased Diego Maradona as a “legend of our game”.

England has endured more than its share of dark days throughout the last forty or so years. Stuart Pearce and Chris Waddle in 1990. Gareth Southgate six years later.

But amid numerous instances of on-field agony, perhaps none of them can quite compare to what transpired when England faced Argentina in the 1986 World Cup quarter-final at the Estadio Azteca on that sunny June afternoon in Mexico City.

With the spectre of the Falklands War looming large over of the game, England took to the field with ambitions of running over what was – Maradona aside – a distinctly average Argentina team, but despite being armed with the midfield artistry of Glenn Hoddle or the goalscoring instincts of Gary Lineker, each and every player was overshadowed by the Argentinian genius.

His first goal that day, the now infamous ‘Hand of God’, rendered Maradona to be a permanently vilified figure within English football. Taking advantage of a miscued clearance by Steve Hodge, the 5ft 5in Argentina skipper charged towards the advancing English goalkeeper Peter Shilton and launched into the air to prod the ball into the empty goal with his hand.

Farewell, Diego. A legend of our game. pic.twitter.com/iIXGLEf7B1

In today’s VAR-dominated game, it would be an afterthought. In 1986, it was an incident which defined an entire generation of footballers.

But if the first goal enraged a nation, the second had it enthralled. Just four minutes later, Maradona seized upon a loose ball in midfield, engineering just enough space that his talent required. England’s midfield general Peter Reid trailed in his wake. Terry Butcher couldn’t do much better. Terry Fenwick was left for dead. Shilton? Helpless.

It was later called the ‘Goal of the Century’.

If England and their fans were (justifiably) aggrieved by the nature of the first goal, the second was undeniable. In a way, this game was the perfect microcosm of what Diego Armando Maradona brought to a football pitch: unbelievable artistry combined with a ruthless ‘anything at any cost’ approach to winning.

True to form, Maradona was central to Argentina beating West Germany in the World Cup Final that year – and perhaps no national team captain has deserved the feeling of wrapping his hands around that famous trophy quite as much as Maradona did that day.

And as if to show that there are no hard feelings, English football’s official Twitter account summed up the footballing icon simply: “Unforgettable,” they wrote. “Farewell Diego, a legend of our game.” 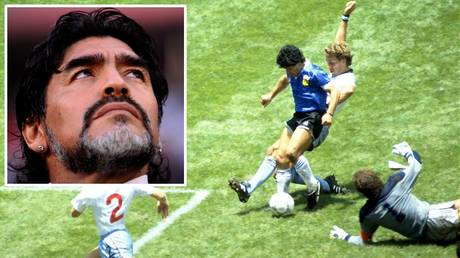