Boxer Ebanie Bridges, who admitted to selling used socks for hundreds of dollars to fans, has landed a world title shot despite having had only four pro fights, and now says that “having fake boobs helps” on the road to the top.

Self-styled as ‘The Blonde Bomber’ the Australian has carved out a career for herself in professional boxing having earlier been a competitive bodybuilder, but has gained more attention from what she does with her training gear out of the ring rather than inside it during sessions.

The smutty side-career hasn’t only helped her bank balance but has also seemingly helped her land a world title shot for the vacant World Boxing Association World Female bantamweight title in Britain in November.

That’s despite only having racked up four professional fights so far, one of those coming against a debutant, and having fought just one fighter with a winning record, on her professional debut. And boxing purists aren’t happy at the news.

Fans believe that Bridges’ breakthrough has come solely as a result of her audacious side-hustle and Instagram posts flaunting her fake boobs, as her extremely mediocre and as-yet ephemeral record in the sport and lowly ranking of 29th in the world, plus lack of any experience at world level, doesn’t point to a fighter who has earned their shot through hard work and talent.

Some fans likened her world title tilt in the early stages of her career to that of Ukrainian superstar Vasyl Lomachenko, but those takes were quickly shot down by fans quick to point out Bridges couldn’t be compared to a double Olympic champion with just one loss in nearly 400 amateur fights.

Has Ebanie Bridges got a world title fight because a few men have splaffed over her training vids?

Yeah Ebanie Bridges with her fake tits and four professional fights, with only one having a winning record, is the same as a double Olympic gold medalist, with one defeat in about 400+ amateur fights, getting a world title fight in his second professional bout. https://t.co/DDvECcItDf

Who needs #OnlyFans when you have dirty socks #JustSaying

Bridges was quick to reply to a fellow pro boxer with a 4-0 record, who asked Matchroom boss Eddie Hearn whether she too would have to sell socks to gain a world title.

Bridges bit back: “Fake boobs help u should invest (bit of a weight disadvantage tho) & so does exciting fight styles, personality & charisma, it’s an entertainment sporthate & complaining doesn’t get u anywhere. Put ur head down & try harder thats my advice oh& fake boobs Defs fake boobs.” 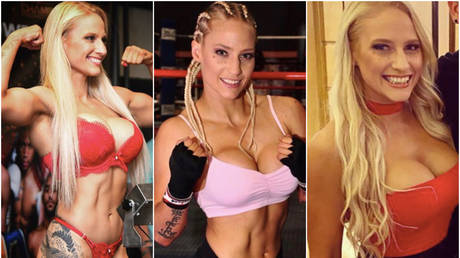