Argentine media outlet La Nacion has claimed to have gained a first direct insight into Lionel Messi’s decision to quit Barcelona, citing sources close to the player, although the veracity of the report has questioned.

Messi dropped a bombshell on the footballing world on Tuesday when he informed Barcelona by fax that he wants to leave the club this summer.

The 33-year-old cited a clause in his contract which allows him to leave for free at the end of each season – an agreement which he says is still in force due to the prolonged campaign caused by the Covid-19 pandemic.

Barcelona officials insist however that the clause expired in June, meaning Messi is under contract at the Nou Camp until the summer of 2021.

Messi has not yet spoken publicly about his decision, although leading Argentine outlet La Nacion quoted a source close to the star as supposedly explaining his decision.

“I made the decision with [wife] Antonela to leave Barca. It hurts my soul, but that’s it. The chapter has been closed,” the outlet reported Messi as saying.

The outlet further claims that Messi has set his heart on reuniting with former Barcelona manager Pep Guardiola at Manchester City – but the piece has been refuted by respected Spanish football reporter Guillem Balagué, who claims the basis for the report is fake.

Guardiola is said to have spoken with Messi last week in the wake of Barcelona’s stunning 8-2 defeat to Bayern Munich in the Champions League, while further reports stated this week that the English club are looking at how financially feasible a swoop for Messi would be.

A major sticking point will be whether Messi is allowed to walk away from the Nou Camp for free, as he believes he is entitled to, or whether Barcelona can command a transfer fee for him.

His release clause is officially set at €700 million ($830 million), but failing that it is understood that the club would at least demand a world record fee for the star – eclipsing the €222 million that Paris Saint-Germain paid Barca for Neymar in the summer of 2017. 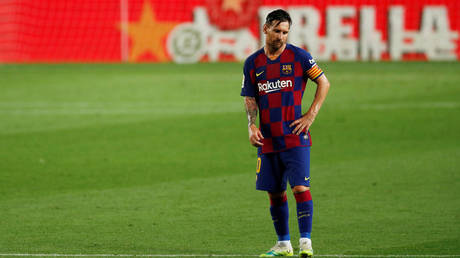