Dutch cycling star Fabio Jakobsen is recovering well after his horrific crash in the Tour of Poland two months ago, but revealed that he’s set for significant surgery to repair his face after his huge accident.

Jakobsen was placed in a medically-induced coma after his crash on the first stage of the race following a collision with Dylan Groenewegen as they sprinted for the finish line at the event.

The 24-year-old, who was pitched into barriers and crashed into a race official, went into surgery, and was operated on for five hours following the accident.

But now, two months on from his terrifying crash, Jakobsen has spoken of his ordeal and explained the further challenges that lay ahead as he embarks on the long road to recovery.

“First of all, I had to recover from my brain contusion and other bruises/injuries for a long time,” Jakobsen said on Twitter.

“The wounds/scars on my face are healing up well.

“On Oct. 8, I will undergo a second surgery to reconstruct my face/mouth … The surgery involves placing bone, taken from my pelvic crest, in my upper and lower jaw, because a lot of bone is missing there.

“This bone will have to heal for several months. After that, another surgery will take place to put implants in my jaw so that I can get new teeth, as I lost them during my crash.”

Jakobsen had previously said he feared for his life and that his time in intensive care was a “difficult, dark period”.

After Jakobsen’s crash, the governing body of world cycling, the UCI, stated that it would investigate all crashes in the 2021 calendar in a bid to improve rival safety. 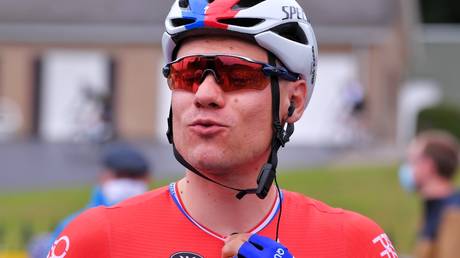