Formula One legend Michael Schumacher is reportedly continuing his recovery from a life-threatening skiing accident in 2013 in a $34.5 million villa previously owned by Real Madrid president Florentino Perez in Mallorca, Spain.

Schumacher suffered a head injury when he fell and hit a rock whilst skiing off-piste in France.

After undergoing two operations to remove blood clots from his brain, he was placed in a medically induced coma for six months.

In 2014 he was brought out of it to reduce swelling in his brain and was moved to his home in Geneva, Switzerland, to continue his recovery there.

According to Spanish press reports, the German is now staying at Villa Yasmin in Andratx, Mallorca.

The former racing driver’s wife, Corinna Schumacher, is said to have bought the mansion after Perez put it up for sale in 2017, five years after the death of his wife Maria Angeles Sandoval.

Perez had bought the 15,000-sq-meter property, which includes a helipad, a gym and two swimming pools, in 2005.

Elisabetta Gregoraci, the ex-wife of former Benetton/Renault F1 team manager Flavio Briatore, is quoted by the Spanish press as saying on the Italian version of Big Brother that Schumacher “moved to Spain and his wife has set up a hospital in that house.”

She has also reportedly given an insight into his condition.

“Michael doesn’t speak, he communicates with his eyes,” she said. “Only three people can visit him and I know who they are.”

Former Ferrari team boss Jean Todt recently offered a more positive update on the 51-year-old after visiting him in Switzerland: “He is fighting. I hope the world will be able to see him again. This is what he and his family are working towards.”

Prominent neurosurgeon Erich Riederer also weighed in whilst appearing in a documentary that aired on French television earlier in September, although he is believed to have given his opinion as an outsider.

“I think he’s in a vegetative state, which means he’s awake but not responding,” he said. “He is breathing, his heart is beating, he can probably sit up and take baby steps with help, but no more.

“I think that’s the maximum for him. Is there any chance of seeing him like he was before his accident? I really don’t think so.”

Schumacher holds a record seven World Championship titles, including five consecutive victories with Ferrari between 2000 and 2004.

He also holds the record for most Grand Prix wins with 91.

Mercedes’ Lewis Hamilton will equal the latter record if he takes the checkered flag at the Nurburgring in the Eifel Grand Prix on October 11, and he’ll pull level with Schumacher’s title record if he finishes atop the standings this year. 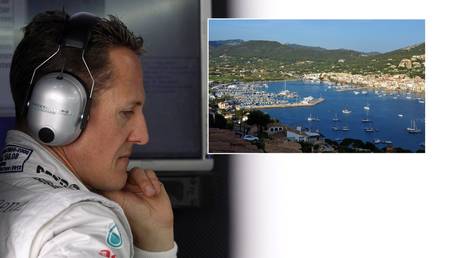