Russia’s Danill Medvedev earned a first-ever win over Rafael Nadal to knock the Spaniard out of the ATP Finals in London and set up a title decider against Austrian ace Dominic Thiem.

World number two Nadal had served for the match at 5-4 in the second set, but Medvedev found a way back to force a tie-break before pressing on to victory in the third set.

The win for the 24-year-old Russian, ranked fourth in the world, continued a remarkable week for him in London in which he had already won three out of three in the group stage of the tournament, including a victory against world number one Novak Djokovic.

In beating Nadal, Medvedev went some way to avenging his loss to the Spanish icon in the 2019 US Open final, where the pair played out a five-set epic.

Nadal’s defeat means the 20-time Grand Slam winner remains without an ATP Finals title, the biggest prize to elude the 34-year-old in his long and glittering career.

“I felt really strange until 5-4 for him in the second set, when he was serving for the match,” Medvedev said afterwards, the ATP website reported.

“I decided to change some small things. Just being closer, going for it a little bit more. I felt like I had the chances to win before [in] some games, a set maybe, but it didn’t work, so I had to change and it worked really well. I am really happy about it.”

Thiem has likewise looked in remarkable form in London, also beating Nadal in the group stage.

Tennis pundits described Thiem and Medvedev’s dominance over two of the ‘Big Three’ in men’s tennis this week as something of a ‘unicorn’ event.

Thiem and Medvedev both beat Nadal and Djokovic in the same event (that happening once is incredibly rare, twice is like a unicorn). Extraordinary week from both guys and fully deserving finalists.

Medvedev could etch his place in the history books if he beats Thiem, which would mean he has picked up wins over the top three in the world on his way to the biggest title in his career to date.

en route to the title.

Thiem could become the first Austrian ever to win the ATP Finals in the tournament’s 50-year history, while Medvedev would be only the second ever Russian to scoop the accolade, after Nikolay Davydenko in 2009. 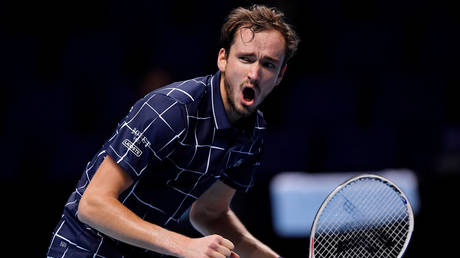