Former WWE and UFC star Ronda Rousey has taken to social media to express solidarity with Armenia and Nagorno-Karabakh over their ongoing conflict with Azerbaijan and Turkey.

“Armenia and Artsakh [Nagorno-Karabakh] are under attack!” former UFC bantamweight champion Rousey wrote in a post to her 13.1 million followers on Instagram.

“Show your solidarity in this global effort to raise awareness. Express your outrage regarding the unprovoked attacks by Azerbaijan, assisted by Turkey and the overt desire for ethnic cleansing of Armenians from their ancestral homeland Artsakh.”

She also urged American followers to fill in a form urging President Donald Trump to “condemn the actions of Azerbaijan and Turkey” and provided a link where donations can be made.

Rousey’s call for solidarity comes amid an ongoing conflict in the region between Armenia and Azerbaijan over the disputed area of Nagorno-Karabakh.

The region is considered internationally as part of Azeri territory and Azerbaijan does not recognize the independence of the Nagorno-Karabakh, which has a predominantly Armenian population of around 145,000, but it has not been under the control of Baku since 1988.

A precarious ceasefire was reached in 1994 after a six-year conflict, but hostilities resumed along the border in late September.

On Monday, both Armenia and Azerbaijan accused the other of targeting civilian populations with missile and rocket attacks.

Armenia has also accused Turkey of aiding Azerbaijan, and both sides have accused each other of spreading disinformation during the conflict.

Rousey, who was coached by Armenian American Edmond Tarverdyan during her time in the UFC, visited Armenia in 2015 on the 100th anniversary of the Armenian massacre at the hands of the Ottoman Empire.

“I know there was a terrible genocide in 1915 and I’m here to support the effort to get it recognized because I believe the only way for us to learn from our past is to recognize that it happened,” she said at the time.

“[Armenians] have been very kind to me growing up. They accepted me into their culture and I wanted to do something special to help out for the 100-year anniversary and I thought there was no better effort to show than to come and be here in person.”

The massacres that occurred between 1915 and 1923 were not recognized by the United States as genocide until last year. The USA are now one of 32 countries that recognize it as such, alongside the likes of Russia, Germany, France and Canada.

Rousey competed in MMA until 2016 before deciding to leave the sport after consecutive defeats to Holly Holm and Amanda Nunes, which saw her lose and then fail to regain her bantamweight belt.

The following year she signed a full-time contract with the WWE. 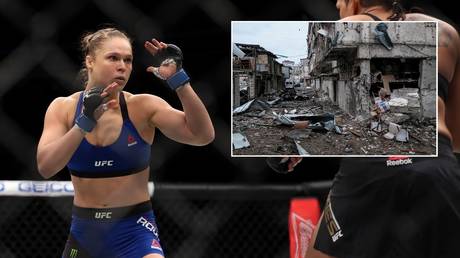