Professional wrestler and occasional mixed martial artist Alberto Del Rio, who is sometimes known as Alberto El Patron, has been indicted on charges stemming from an alleged kidnapping and sexual assault earlier this year.

The charges against the 43-year-old, whose real name is Jose Rodriguez Chucuan, are related to the alleged May 3 incident in which he is accused of sexually assaulting a woman with whom he was in a relationship with after accusing her of infidelity. The woman in question states that this happened more than once.

Per the arrest report issued by the Bexar County District Attorney’s office in Texas, she denied Del Rio’s accusations of being unfaithful but the wrestler retaliated by slapping her in the head and forced the woman to dance for him.

The complaint also details how Del Rio – who is 6ft 4in and 240lbs – tied her hands, put a sock in her mouth and proceeded to sexually assault her for several hours, using several objects in the process of doing so.

She also stated that Del Rio told her to stop crying and that he would “drop [her son] off in the middle of the road somewhere” if she didn’t comply.

The accuser also told police that Del Rio destroyed her phone and laptop and attempted to burn her passport. She states that the attack began at 10pm on May 3 and continued until 2.30pm the following day.

It is understood that Del Rio is being arraigned on Friday with a trial date not yet set. If convicted solely of the aggravated kidnapping charge, he could be facing five years to life in prison, while the sexual assault charges carry a term of between two and twenty years.

Del Rio was a member of the WWE roster between 2009 and 2016 where he won the WWE Championship as well as the 2011 Royal Rumble. He has also compiled a 9-6 record in mixed martial arts dating back to 2001. He was last seen in the cage losing to Tito Ortiz last December. 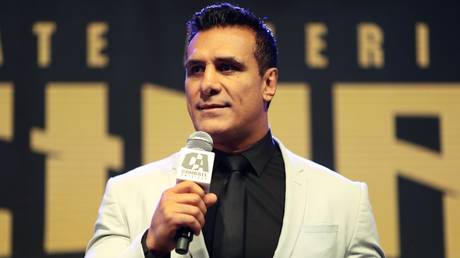