Belgian ex-UFC fighter, teacher and mom-of-five Cindy Dandois has launched a new account on premium adult site OnlyFans in a bid to solve “big financial problems” caused by the pandemic and “give the youngsters their home back.”

Dandois signed with the Professional Fighters League in March but has turned to the subscription and tipping site after a miserable few months of lockdown during which the 35-year-old has been forced to close down her MMA Lynx gym in Antwerp.

Her early posts on the salacious site have included photos dedicated to admirers “who have special love for my butt or the tattoos on it,” opportunities for subscribers to decide the colour of her racy outfits and a promise to exchange messages with fans paying $15.99 per month for the privilege.

“I lost my gym during this Covid-19 lockdown,” she explained to her following of almost 15,000 on Twitter. “No help from our government and fights cancelled, leaving me with big financial problems.

I lost my gym during this Covid-lockdown, no help from our gouvernement and fights cancelled,… leaving me with big financial problems. I descided to make an Only Fans so I can collect the money to re-open the gym and give the youngsters their home back. https://t.co/MrlSr9hLLv pic.twitter.com/2OwRACfyMt

“I decided to make an OnlyFans so I can collect the money to re-open the gym and give the youngsters their home back.”

Dandois also told her audience of almost 39,000 on Instagram that her move into charging for adult content had taken “a lot of thinking.”

“If you want to support me, go and subscribe,” she added. “There will be pictures and little messages and the possibility to chat with me privately.”

Another received a similar reply after enquiring: “Pics? Vids? Girl on girl? Solo action? What are we talking here? I need to know before I sign up.”

She swiftly created an Amazon Wishlist allowing fans to have gifts sent to her, pledging to take a “creative picture” with every present she received while beckoning: “Let’s have some fun.”

The former Bellator MMA brawler, known as ‘Battlecat’, showed off her “perfect imperfections” on the site and acknowledged: “Yes, my body shows that I am a mother.”

Posting an animation of video game pair the Super Mario brothers saying “haters gonna hate”, she later revealed that she was “getting a lot of hate” about her new account.

“I will try not to let it bother me,” she declared. “The moment my boys and girls are back to training, I will absolutely remember who supported us and who hated on us.”

Dandois lost her only UFC fight to Alexis Davis on a decision in April 2017 but has an impressive professional record, winning 16 of her 21 contests.

She last fought at the Cage Survivor 14 event in Athens in December, submitting Eleni Mytilinaki with an armlock in the second round of their scrap, and MMA clearly remains her true focus above what appears to be a temporary move into modeling.

“The passion and love I have for my sport has brought me the most beautiful moments, but unfortunately also the greatest depths,” she wrote.

“This Covid-19 period and the fact that our Belgian government simply does not support me at all is turning my life around. I dream of restarting my team at Lynx MMA soon again so that all our youth can get back to work.

“Unfortunately some financial setbacks will have to be dealt with first. I hope that both my Lynx team members land I will be walking back to the octagon in 2021.” 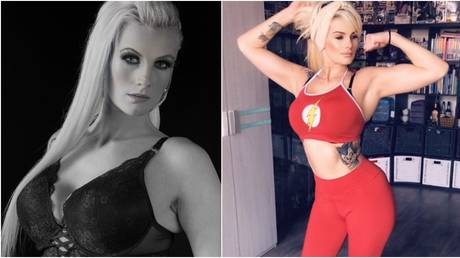