Former Detroit Red Wings star Pavel Datsyuk has turned to President Vladimir Putin to ask him to look into the details of the “outrageous situation” involving Shiigumen Sergius (aka Father Superior), who was arrested in December.

The letter addressed to Putin, signed by the former NHL star and others, described the priest’s detention as “total lawlessness” and claimed Russian special police forces attacked Ekaterinburg’s Central Urals Monastery in violation of the law and injured many people.

“Extreme circumstances forced us to personally address you, as the guarantor of the Russian Constitution,” it read.

“Without showing any documents and bringing any accusations, they forcefully took Shiigumen Sergius out of the monastery. After that they rioted the monastery’s territory,” it added.

The letter said that over 500 people, including women and children, who were inside the building were forced to spend several hours in temperatures of -26C (-14F).

Datsyuk, who was among many public figures to sign the letter and attended services held by Sergius, said the priest was wrongfully accused of crimes he has never committed.

Russian police officers detained the priest after footage of his sermon leaked online.

In the video, Shiigumen Sergius is seen talking about people who committed suicide and asking his parishioners, including underage people, whether they were ready to die for Russia.

The priest was accused of inciting people to suicide, infringing on rights and religious freedoms and usurpation of power.

The priest made the headlines last year after he was banned from conducting religious duties because of his claims that the Covid-19 outbreak was a “pseudo-pandemic” and that it was being used as an excuse to microchip the public.

Sergius also complained that the closure of churches in Russia during the coronavirus crisis was done under pressure from “the atheistic authorities.” 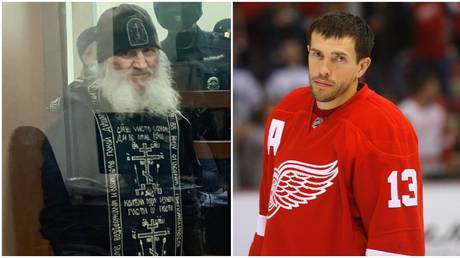