Ex-World Cup winger John Barnes has bizarrely claimed that Liverpool coach Jurgen Klopp would have been sacked by the club within two years had he been black, insisting that the Premier League’s anti-racism drive has “no impact”.

Pundit and Reds legend Barnes said that “nothing had changed” for black people in urban areas, adding that the lack of black managers in football was part of a major societal issue that would have cost Klopp his job because of “perceptions” if he had been black.

The two-time top-flight winner with the club believes that people are taught not to view black people equally, leading to non-white managers being given less time to view themselves.

“It’s nothing to do with black football managers,” Barnes told Play Ojo. “This is a wider issue because how many black managers are there in the higher echelons of any industry? And why should football be any different?

Its not ABOUT JURGEN KLOPP… its about the fact that black managers are given less time… its not a criticism of jurgens record https://t.co/BHpStubEEE

No black manager can come with the qualities of klopp because they havnt been given an opportunity to show their quality… why do you think there are so few black managers? https://t.co/BmIqJRX60r

For everyone getting uptight, john barnes thinks jurgen klopp is and always was absolutely the right man for the job even in the 1st couple of years when we were 25 points off the top of the table, i had complete faith in him and his ability to get us to the top of the league

“You can’t change structures and laws. You have to change perceptions because there are always ways around those structures.

“The Rooney Rule came in in the NFL in 2003 because the league only had three black coaches. Here we are 17 years later – how many black coaches do they have? Three.

“So you can put structures in place but until you change your perception, nothing will change.

Liverpool slipped from sixth to eighth in Klopp’s first season in charge in 2016, but the Premier League newcomer and his coaching staff were awarded six-year contracts at the end of the campaign after guiding the club to its first European final in nine years.

Liverpool finished fourth the following season, qualifying for the Champions League after a two-year absence and reducing the gap between themselves and the champions from 21 points to 17 points, having finished 25 points off the pace the season before Klopp arrived.

Barnes was dismissive of the change that the Premier League’s high-profile campaign, “No Room for Racism”, was likely to make, saying that it did not go far enough.

“They can have no impact on racism in sport,” he replied, when asked if he was skeptical about similar initiatives. For 99 percent of fans who don’t support Man City, will they be influenced by Raheem Sterling when we say No Room For Racism?

“Football can bring the issue to the table but it can’t change the problem. Society has to change a problem.

“Even the whole idea of walking off the pitch…do you think that a racist football fan is going to not be racist?

“What we’ve learned for hundreds of years is that we don’t see women as equal, we don’t see blacks as equal. We have certain perceptions of different groups of people based on what we’ve been taught.”

Barnes, who had disastrous spells in charge of Celtic and Tranmere as a club manager, echoed the views set out by US Women’s captain Megan Rapinoe earlier this week.

Rapinoe called on the likes of Lionel Messi and Cristiano Ronaldo to go beyond wearing Black Lives Matter t-shirts, imploring them to trumpet anti-racism messages to their vast followings on social media.

“I support them using their profile to keep the issue in the news agenda, but now we have to go that step further,” Barnes said of the Premier League. “Say No To Racism been around since I played in the Champions League 20 years ago, and what has changed? Nothing has changed.

“Imagine what footballers can do to use their platform and their profile to really make a difference in the inner cities for black people.” 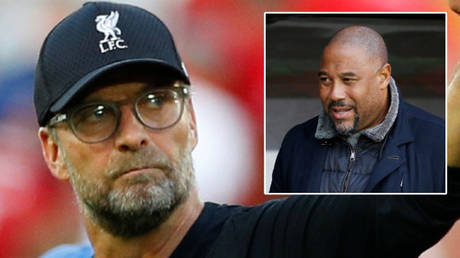