Close
Trending News
HomeSport‘Everything came back to me’: Kvitova emotional after reaching French Open quarterfinal as she recalls comeback from knife attack

‘Everything came back to me’: Kvitova emotional after reaching French Open quarterfinal as she recalls comeback from knife attack

‘Everything came back to me’: Kvitova emotional after reaching French Open quarterfinal as she recalls comeback from knife attack

Petra Kvitova cut an emotional figure after the Czech star secured a place in the French Open quarterfinal on Monday as she recalled her return to action at Roland-Garros after a career-threatening knife attack.

Kvitova was attacked by a knife-wielding robber in her home in Prostejov, Czech Republic in December 2016, which left her requiring surgery on her playing hand.

She suffered severe cuts to her fingers as she defended herself from her assailant, which damaged her nerves and tendons in her left hand and left her tennis career hanging in the balance.

The Czech successfully returned from the injury at the 2017 French Open, though, defeating Julia Boserup in the first round before losing to Bethanie Mattek-Sands in her second match.

I have so many emotions going through my head, but for now I will just keep on fighting 💪 #couragebeliefpojd #RolandGarros pic.twitter.com/zHef2DiS1Y

After beating Zhang Shuai to reach the quarterfinal in Paris on Monday, the no. 7 seed had to fight back tears.

“I got a bit emotional during the last two points of my match,” she said.

“I really started to think still about the match because in tennis we really never know when it’s the end. But my memories, happy memories, when I made my comeback here 2017, when I step on the Philippe-Chatrier, I couldn’t really imagine me to be in the quarterfinal of this Slam.

“Everything just came back to me. As I’m talking, I’m getting emotional again. It’s been a long ride, definitely.

“Everything came to my mind when I had my whole family, people who I loved who helped me through the tough, tough time.”

She eased past Zhang 6-2, 6-4 in 85 minutes to continue her impressive run through this year’s tournament.

Kvitova has not dropped a set at Roland Garros this year and is one of just three seeded players remaining in the competition alongside Elina Svitolina and Sofia Kenin, who are seeded third and fourth, respectively.

She’ll face Laura Siegemund in her quarterfinal. The pair have only met once before, when Kvitova dispatched her 6-1, 6-1 at the US Open in 2015. 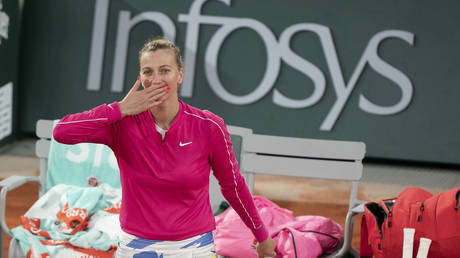