‘Everyone’s so sensitive’: Team slammed for censorship after US cyclist suspended for using BLACK HAND emoji in Twitter Trump row

‘Everyone’s so sensitive’: Team slammed for censorship after US cyclist suspended for using BLACK HAND emoji in Twitter Trump row

Teen Quinn Simmons has been forced to insist that he is not racist and does not “hate” Donald Trump critics, with cycling team Trek-Segafredo pledging to help him “grow as a person” as part of a grovelling apology for a tweet.

2019 junior champion Simmons faced an immediate backlash after using a black hand emoji to wave at a Trump opponent in a tweet, bidding a virtual farewell to a journalist who had labeled the president “vile” and “horrible” while wishing defeat upon the Republicans in next month’s US presidential election.

The presidential election is taking place against a backdrop of heightened awareness and debate around race issues, and some readers were quick to ask starlet Simmons why he had chosen to use a black hand in his message.

Simmons reacted after Dutch reporter Jose Been wrote: “My dear American friends, I hope this horrible presidency ends for you and for us as (former?) allies, too.

This story shows how crazy & totalitarian “anti-racists” have become.

American professional cyclist @QuinnSimmons9 was kicked off his team for Tweeting “Bye” with a black waving hand & admitting to be a Trump fan. That’s it. That constitutes racism in 2020.

Hey Quinn. I would genuinely like to know why you chose to use a black emoji? Very curious.

“If you follow me and support Trump, you can go. There is zero excuse to follow or vote for this vile, horrible man.”

After replying with “bye” and a black hand to Been, Simmons told a cyclist and writer who also shunned him for backing a “hateful, racist fascist”: “What a loss”.

Shortly afterwards, US team Trek-Segafredo announced that the 19-year-old would not race for them “until further notice”, revealing their decision alongside a statement by the rider pleading with people not to hate him over political disagreements.

Supporters of Simmons were left furious. “They talk about diversity but cannot accept different opinions,” said one.

It’s quite funny, they talk about diversity but cannot accept different opinions. PC fanatics are always on about right or wrong, everything is black or white for them. btw, should Asians always be offended by “normal” emojis?🤣 bloody hypocrites. Everybody has freedom of speech.

I hope @TrekSegafredo will be waving goodbye to you to if you support Trump.

I do not know you, but you have my support from Belgium @QuinnSimmons9! The @TrekSegafredo reaction and other extreme reactions are ridiculous and fascistic, a shame for freedom of speech!

I hate Trump but your tweet was harmless enough. You’re allowed your views, it shouldn’t have led your team to suspend you.

But I would love to persuade you to see the harm that Trump has brought to America. 😉

“PC fanatics are always on about right or wrong, everything is black or white for them. By the way, should Asians always be offended by ‘normal’ emojis?

“Bloody hypocrites. Everybody has freedom of speech.”

Referring to another tweet in which proud American Quinn confirmed he supported Trump, a supporter asked: “Really? He said ‘bye’. Divisive? Come on, that team is pathetic.”

Another argued: “The reaction and other extreme reactions are ridiculous and fascistic. A shame for freedom of speech.”

Bye as well to Quinn.

Everyone is so sensitive. Quinn, keep riding bikes fast. You have a new fan.

Really? He said “bye”. That’s inflammatory and incendiary speech? They replied “must be a trumper” and he said “that’s true”, Divisive? Cmon, that team is pathetic. Don’t ride for them anyway.

I am by no means a Trump supporter. I always took him for a con man, even before his reality TV show days. But it seems petty for @TrekSegafredo to essentially fire you for those comments. I’m guessing you had some type of social media clause in your contract?

One reader pointed out: “Of course you can disagree with his political preference. But he’s still a free human wo can vote for whoever he wants. Apparently he’s not the only one voting for him.”

Team manager Luca Guercilena said that Trek-Segafredo were “committed to helping Quinn as much as we can.”

“We hold all Trek staff and management to a high ethical standard and our athletes are no exception,” he added.

“We believe that Quinn has a bright future as a professional athlete if he can use this opportunity to grow as a person and make a positive contribution to a better future for cycling.”

In America you certainly can say what you like from a soapbox in the middle of Time Square, BUT those words may have repercussions if say a private company doesn’t want an openly RACIST employee representing them.

Quinn Simmons is free to profess his political beliefs. Equally @TrekSegafredo are free to decide whether those beliefs sit well with a brand whose men’s team wore ‘No To Racism’ masks at the TDF in support of BLM and that also invests significantly in women’s racing.

One thing I’ll say for this Quinn Simmons stuff is he’s still incredibly young. Hopefully one day he’ll realise what a massive dingus he’s been.

Off course you can disagree with @QuinnSimmons9 his political preference. But he’s still a free human wo can vote whoever he want. Apparently he’s not the only one voting him? We are cycling fans. It’s easy to attack someone on Twitter. Then we’re exactly the same as @POTUS

In his statement, Quinn said: “As an American rider, I have always been proud to represent my country. Riding for an American team has been a lifelong dream.

“A big reason I chose this team was because of the American values behind it.

“To those who found the colour of the emoji racist, I can promise that I did not mean for it to be interpreted that way. I would like to apologize to everyone who found this offensive as I strongly stand against racism in any form.

“To anyone who disagrees with me politically, that is fine. I won’t hate you for it. I only ask [for] the same.” 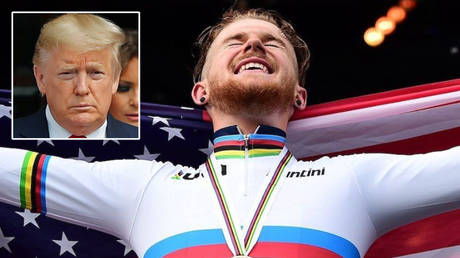