The tournament, run by Serena Williams’ coach Patrick Mouratoglou, offers a different approach to the game, with matches consisting of four 10-minute quarters, with no games or sets involved.

Instead, players simply play points, with the players playing four mini-games, called quarters. The player who wins the most quarters is declared the winner.

The format also allows more freedom of expression on court to bring out players’ personalities, and, during an interview between quarters, Moutet let his feelings be known about Tsitsipas’ father, whose conduct during play had angered the Frenchman.

The players ended up in a heated discussion after world No. 75 Moutet became irate after accusing Tsitsipas’ father, Apostolos, of disrespect by talking when he was preparing to serve.

Eventually the umpire intervened and asked the players to resume play.

“I won’t speak about Stefanos, because he’s a good guy,” Moutet told the commentators during a mid-match interview.

“But it’s just (his) father is stupid, everyone thinks he’s stupid.

“He’s speaking when I’m serving, all the time. It’s not respectful.”

The argument clearly affected Moutet, who let a 2-0 lead slip as Tsitsipas won the third and fourth quarters to tie the match at 2-2, then won it in a sudden-death tiebreaker.

“I had experience with this in the past. I don’t want to say more, but I don’t see why there should be a problem,” said Tsitsipas after the match.

“My father is trying to encourage me before the serve and he’s not really interrupting. My opponent makes a big deal out of it.”

Tsitsipas’ victory sees him join Richard Gasquet, Matteo Berrettini, and David Goffin in the semi-finals of the tournament, which is taking place behind closed doors at Mouratoglou’s tennis academy in Nice, France. 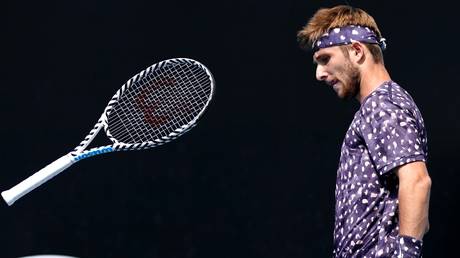