Close
Trending News
HomeSport‘Everyone could have recognized me’: Chess grandmaster who was banned for cheating is ‘caught competing AGAIN under new name’

‘Everyone could have recognized me’: Chess grandmaster who was banned for cheating is ‘caught competing AGAIN under new name’

‘Everyone could have recognized me’: Chess grandmaster who was banned for cheating is ‘caught competing AGAIN under new name’

Disgraced chess player Igors Rausis, who was banned from all FIDE-rated tournaments for cheating in 2019, has reportedly found a loophole allowing him to compete again, entering a contest in Latvia under a different name.

The 59-year-old, who was stripped of his grandmaster title last year after being caught using a phone during a chess tournament in France, is said to have shown up at a local rapid tournament in Latvia on Saturday.

READ MORE: Fast chess in the air: Russian grandmasters are set to play blitz game while flying in different planes

Rausis – playing under the name Isa Kasimi – purportedly wore a face mask in order to remain unrecognized. But he was forced to withdraw from the third round after Latvian grandmaster Arturs Neiksans, who had noticed him playing, filed a protest.

Neiksans believed Kasimi was trying to hide his identity, but the player denied this, pointing out that he is a well-known figure in Latvia.

“I am a well-known figure in Latvian chess. Everyone could have recognized me already during the first round. Besides, I had already played two earlier tournaments, one Fischer random and one ‘dice chess’, under my new name,” Kasimi said.

Neiksans’ complaint was not upheld, as the rapid tournament was not officiated by FIDE, the body which banned Kasimi from playing. An infuriated Neiksans, who was a heavy favorite to win the small event, continued to protest until Kasimi withdrew from the competition. 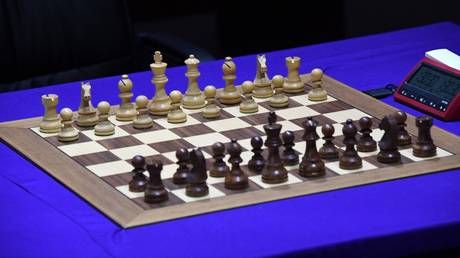 Mars is ‘triple its normal size’ i...