‘Even the mascot’s in disbelief’: Fans stunned as Chelsea star Werner misses sitter from just yards out vs Rennes (VIDEO)

‘Even the mascot’s in disbelief’: Fans stunned as Chelsea star Werner misses sitter from just yards out vs Rennes (VIDEO)

German forward Timo Werner was guilty of one of the misses of the season as he somehow blazed over the bar from just six yards out with the goal gaping in the Champions League clash at Rennes.

Werner has already plundered eight goals in 13 games for Chelsea since his summer switch from Bundesliga outfit RB Leipzig, and should have added to that tally early on against Rennes when Callum Hudson-Odoi put the ball on a plate for him with an inch-perfect ball in from the right flank.

But the 24-year-old German star miscued badly, sending the ball ballooning way over the bar before grasping at the woodwork and then the net as he couldn’t believe the miss.

What a miss by Timo Werner
pic.twitter.com/QY8ancEJru

The sitter was soon picked up online as fans wondered how Werner had failed to put the Blues in front in France.

Timo Werner what HAVE you just done? 🤦‍♂️

It wasn’t even close 😳#UCL pic.twitter.com/Vvt6atvqOY

Some picked up on the reaction of the Rennes mascot behind the goal, who also put his hands in his head at what he’d just witnessed.

Werner’s blushes were spared when Hudson-Odoi, making a rare start for the London club, latched onto a sublime through-ball from Mason Mount to slot Chelsea ahead in the 22nd minute.

Superb work from @MasonMount_10 to win the ball back and place a beautiful ball over the top for @Calteck10 to run on to and finish coolly past Gomis! 👏

Frank Lampard’s men went in ahead at the break, as they chased the win which would book their spot in the Champions League knockout stages with two games to spare. 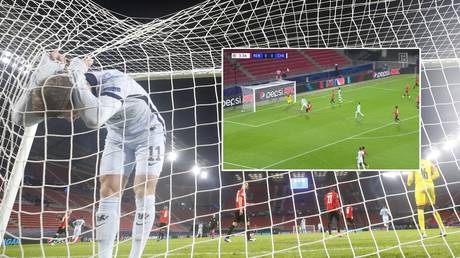 Here’s how the Christmas rules wil...